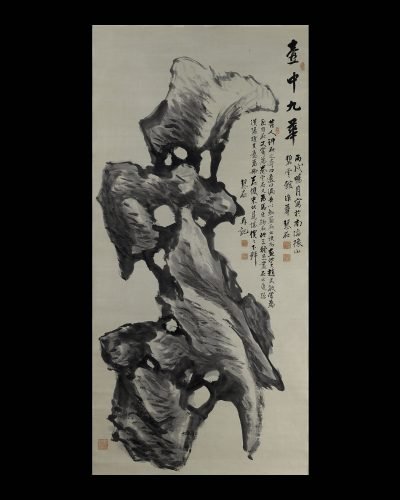 Inscription:
“‘Nine Flowers within a Vase.'[1] During the eleventh lunar month of the year 1886 at Hekiun-kan in Nankai, Yozan (the modern Ehime prefecture), by Kinseki from Naniwa (Osaka).” “In the past a person commented on the wonders of rocks, talking about tou, ‘penetrated,’ and lou, ‘funnels.’ Since I understand the art of painting rocks, I painted this. Zhao Wenmin (Zhao Mengfu, 1254-1352), formerly painted ‘flying white rocks,’ as well as ‘coiled cloud rocks’ and also ‘horse-tooth-hook rocks.’ These three types exhaust the possibilities of rocks. Sun Hanyang (Sun Kehong, 1532-1610) promoted his ideas in an album, which if shown to Master Mi (Fu, 1051-1107), he would regard as worthy of abasing himself in a bow. Kinseki again recorded this.”

A tall garden rock with pierced holes and turning facets fills most of the pictorial space. Shading and internal texturing define the various surfaces of the rock, leading the eye from one area to the next. The artist’s inscriptions, as well as the image, evoke a Chinese tradition that includes Mi Fu of the Song, who would bow down in salutation to extraordinary rocks, Zhao Mengfu of the Yuan, several of whose rock paintings are extant today, and Sun Kehong of the late Ming, whose works were printed in wood-block illustrations and transmitted early on to Japan, where Kinseki would have seen them. The present painting, then, is a portrait of a garden rock of very interesting form and also a marker in the ongoing tradition of such intriguing works.

Mori Shigeru (1843-1921), called Kinseki, was born in Settsu. Adopted by Mori Zensaku, a government official in Osaka, he became a student of Kanae Kinjo (1811-1863), who in turn had studied with Okada Hanko (1782-1846). After Kinjo died, Kinseki studied Western-style painting with Takahashi Yuichi. Kinseki is remembered as one of the best-known Nanga school artists of his generation in the Kansai region, one who did much to establish the Nanga style in Osaka.

1. This phrase is from a poem by Su Shi and means “Everything is in this rock.”