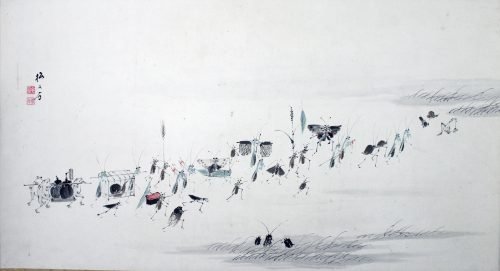 A very unusual procession wends its way across the horizontal surface of the paper, consisting not of humans but rather of insects, animals, vegetables, and grasses. Included in the scene are frogs, grasshoppers, beetles, a dragonfly, ants, a butterfly, a snail, as well as the eggplants and grasses. Processions in Meiji-Taisho Japan were still the privilege of the various feudal lords or daimyo, so the subject here is most likely a parody of the higher class.

Considering that some of the grasshoppers carry long stalks of grain or grasses, which mirror the spears carried by the guards of the daimyo, it seems clear that this painting is indeed intended to mock the political rulers. The two sedan chairs, then, in which are carried a rather voluptuous snail and two eggplants, are perhaps intended to represent the daimyo himself and his lady.

The author of this charming scene was Mori Baiyu (1871-1953), a painter born in Nagoya who studied with Mizutani Seikoku and Tanomura Chokunyu and was influenced by such earlier local masters as Yamamoto Baiitsu and Nakabayashi Chikuto. The present theme was in fact painted by Baiitsu, and a copy of Baiitsu’s work done by Oda Kyosai, another Nanga painter in Nagoya, is very close to the present painting, and ours too was likely based on an original by Baiitsu. A screen painting of a frog procession by Watanabe Nangaku, a disciple of Okyo, is titled “Tonosama-kaeru Procession.” Since a feudal lord was called “tonosama” by the people, a procession including frogs, as here, was easily associated with that of a feudal lord.