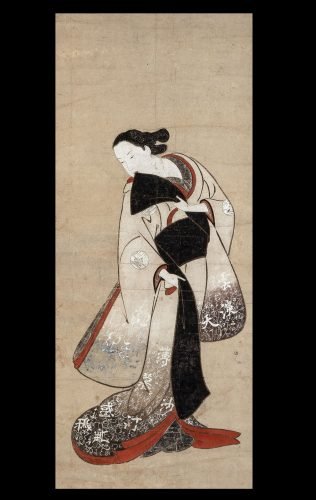 The courtesan in Yasunobu’s painting wears a kimono with unique design: the large Chinese characters relate to a famous landscape series known as the “Eight Views of the Xiao and Xiang Rivers;” these were left in white reserve during dying of the kimono cloth as was another text written in Japanese kana script. On the upper portion of the gown, on the chest and each sleeve, appear roundels with images of one of the “Thirty-six Immortal Poets” set against representations of their writing. These motifs are set off by the red of the inner lining of the kimono and by the strong black lines of the sash the figure is tying, its form appearing almost calligraphic in this context.

Direct panting with ink and colors on garments, a technique known as kaki-e, is one of the simplest and most straightforward methods for decorating fabric and its use is recorded as early as the Nara era in the 8th century. Almost a millennium later that technique was very popular as was the use of large kanji and kana as decorative motifs in textile design (figs. 1-2). Yasunobu’s work here stands as a vivid representation of an extremely fashionable, seductive, and privileged late Edo period world.

Although the exact dates of Miyagawa Yasunobu, to whom the painting is attributed, are not known, he was a disciple of Miyagawa Chōshun (1683-1753), an artist who worked exclusively as a painter and, unlike other ukiyo-e artists, did not design woodblock prints. His paintings feature tall and elegant courtesans dressed in gorgeous kimono placed against a blank or neutral background (fig. 3). Other characteristics of the school, and the present painting, include the bright color and heavy black outlines, with great emphasis placed on the textile patterns. In addition to Yasunobu, Chōshun had a number of other direct pupils and it is clear that the style of Yasunobu’s painting here places him clearly within this first generation of Chōshun’s disciples. 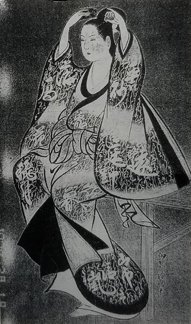