Inscription:
“Old Cheng, noble spirit, thought on the reclusive orchid,
who would throw in the mud the cap and gown of the Sung?
Laugh at he who is without joints, like the bamboo of Ou-po,
even fishermen would be shamed to use it as a fishing rod.

During the 7th month of the year 1933, painted and inscribed with a poem by Keigetsu the Mountain
Man.”

Artist’s seals:
Pu-ju-hsueh (“Not equal to studying”); Keigetsu shan-jen; Ken no (“Cultivating with an inkstone”)

A garden rock with openwork and interesting turnings and facets flows upward as though to join the strands of bamboo that fill the remainder of the pictorial space. The brushwork is extremely lively and the ink seems to flow unimpeded up the paper in contrast to the inscription, the forms of which suggest a downward flow of energy. The painting cannot be termed “calligraphic” in the way Chinese works are frequently characterized (fig. 1) because the brushwork is not really based on the strokes commonly found in calligraphy. Even the “grass” or cursive style follows certain conventions while here the exuberant strokes seem on the verge of flying off the paper, held in place only by a composition that also features varying ink tonalities that establish some degree of pictorial space.

The poem requires some additional comments. “Old Cheng” was Cheng Ssu-hsiao (1241-1318), the early Yuan dynasty painter who refused to paint any ground for his beloved orchids because the earth had been taken over by the invading Mongols (fig. 2). This loyalty is contrasted with that of Chao Meng-fu (1254-1322), who was a member of the Sung imperial family, a descendant of the founding emperor. In 1286 Chao accepted an invitation from Khubilai Khan and for the next decade performed a variety of functions as secretary of the Board of War. Before his death in 1322, Chao served four more Mongol emperors, was governor of two provinces, and was promoted to a number of high posts, including that of director of the Han-lin Academy, the imperial academy to which the leading scholars of the age were invited. Many, including the present artist, in his poem here, have criticized Chao for capitulating to the invaders but others have suggested that Chao accomplished more for his countrymen than he could have achieved by remaining in reclusion. And it should be noted that the present artist was writing in 1933, when unquestioning loyalty was an important issue.

Matsubayashi Keigetsu (1876-1963) was born in Yamaguchi prefecture. He then moved to Tokyo where he studied with Moguchi Yukoku, a disciple of Tsubaki Chinzan (1801-1854), who in turn had studied with Watanabe Kazan (1793-1841). Keigetsu was also influenced by Takamori Saigan whose teacher was a disciple of Kazan. Keigetsuthus belonged to the lineage of the Kachin school, with Ka referring to Kazan, Chin to Chinzan.

Regarded by some as the foremost Nanga school artist of the 20th century, Keigetsu exhibited at both the Bunten and the Nitten exhibitions. He was President of the Nihon Nanga-in and the Nihon Bijutsu Kyokai, a member of the Art Committee of the Imperial Household and the Japan Art Academy. In 1959 he was awarded the Order of Cultural Merit. Paintings by Keigetsu are presently in the collections of the Tokyo National Museum of Modern Art and the Tokyo National Museum. 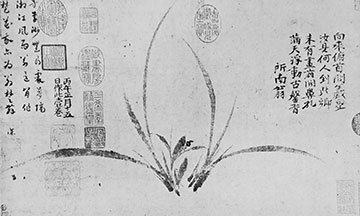