Red lotuses fill the entire format, with leaves and stems providing context and contrast to the irregularly distributed and brightly colored blossoms. Strong shading creates leaves and pods of convincing solidity, while variations in the lighter areas establish an effective pictorial recession from fore to background. In addition to the variety of contrasting colors there is an equally pleasing variety of shapes, which range from the vertical uprights of the stems, to the roughly oval leaves, to the round forms of the buds, and to the angular forms of the blossoms, all of which work together to create a very dynamic and engrossing picture surface.

The lotus is of almost unique importance in Chinese culture, due largely, it would seem, to Buddhist influence: the lotus comes out of the mire but is not itself sullied; it is inwardly empty, outwardly upright; it has no branches but it smells sweet; it is the symbol of purity and one of the eight Buddhist precious things. As such it was portrayed very often in Chinese and Japanese art (fig. 1). Even the names for the lotus are auspicious: lian, “to connect, continuous,” and he, “peace, concord.” In some contexts the red blossoms symbolizes the female genitalia, the lotus stem the male, so all in all the present painting is a complex and beautiful visual argument for continuous peace and great happiness.

Mansheng Wang is constantly experimenting with formats and materials, including various types of ink and paper, painting on pottery and porcelain, woodblock printing, and oil painting on paper and canvas. In the present case this approach manifested itself in the large size of the work and in the use of walnut ink as his media. Born into a humble family in Shanxi province, he began his study of calligraphy and painting independently at the age of seven. A young teenager during the Cultural Revolution, Mansheng took refuge in those turbulent years in practicing calligraphy. Later he was a top student at Fudan University in Shanghai where he majored in classical Chinese literature while also devoting much of his time to the study of old master paintings in the Shanghai Museum. After graduating in 1985, Wang worked as a director of cultural programming at China Central Television (CCTV) in Beijing, producing documentaries on the art and culture of China and Tibet. His position took him to Tibet, where he made a documentary and was profoundly affected by Buddhist art. In 1996 he immigrated to the United States where he began life as an artist, and today leads a relatively quiet but immensely creative life with his family in the Hudson River valley outside of New York City. 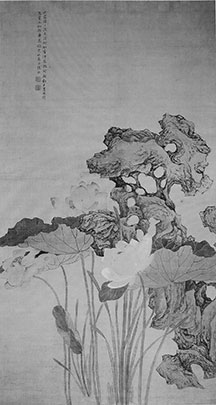