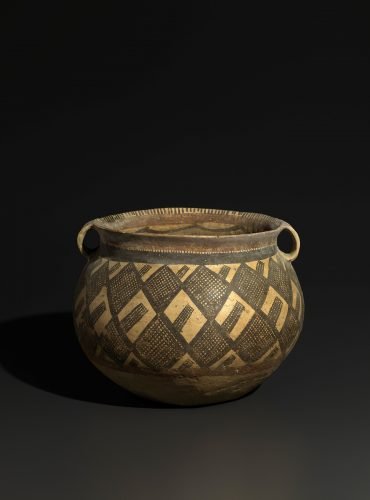 The wide rounded body swells from a flat base, the body curving to a flared rim above the constricted neck. A wide strap handle loops from the mouth to the upper shoulder on each side. The main body zone is decorated with a bold pattern painted in black pigment on the pinkish-buff colored earthenware body consisting of cross-hatched diamonds in two linked rows. Narrow rectangles filled with cross-hatching, which appear like skyscrapers with multiple windows, are painted on diagonals within the alternating diamond and partial diamond frames. This primary design area is bordered by a red band below and a black and red band above. Below each ‘X’- decorated handle is a thick vertical red band flanked by black. Inside the lip rim short parallel lines radiate from a broad red border suspending a swag line that circles the interior.

The shape and decoration of the present ceramic are distinctive features of certain late Neolithic ceramics produced in the upper reaches of the Yellow River, at sites associated with the Machang phase of Gansu’s painted pottery culture. Numerous examples of this shape have been excavated and whereas there is virtually no variation in shape, an immense variety of painted geometric designs are associated with the form. In contrast to standard Yangshao Neolithic ceramic décor that involves curved or undulating lines and designs unmistakably organic in nature, the Machang repertoire is by and large based on straight lines, squares, rectangles and triangles, diamonds, zigzags, and chevrons. The images appear to have less to do with natural rhythms and creations than with man-made structures. These ceramics were being produced at the same time that metalwork was on the rise in this area, in Gansu and Qinghai, the major source of the metal wares excavated from the latest stage of the Neolithic in China.

Although energies were being directed toward developing this more up-to-date medium, ceramic production continued as a viable enterprise. Even if such refinements as burnishing the surfaces of the wares was no longer considered a necessity, coming up with new decorative designs was, resulting in the immense variety generated during this late Neolithic phase. 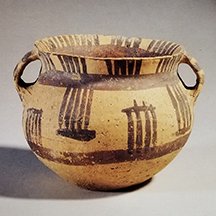 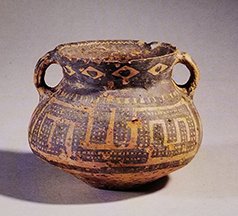 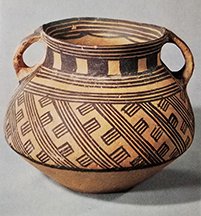