Tall pines rise from precipitous cliffs, the arrowhead shapes of which serve to unify the entire picture. Unlike most compositions, the central portion here seems to recede in importance, with that central space surrounded on both sides and at the top by protruding mountain forms. The resulting composition is highly dynamic, with viewers being attracted by the easy entrance to one portion of the painting while being intimidated, even expelled, by the rest.

The artist’s title of this painting invites comparison with a Song dynasty version of ‘Wind in Pines in Myriad Valleys,’ that by Li T’ang done in 1124 (fig. 1). Whereas Li’s painting can be analyzed quite easily as a three-part composition in the frontal picture plane and also in depth, with foreground, middle ground, and background, the present painting denies all of those logicalities by manipulations of forms and space that result in a far more dynamic picture.

Born in Taiwan, Luo Jianwu studied Western styles of painting and drawing at the Guoli Yichuan, ‘National Art Institute,’ and some of those procedures and attitudes may lie at the foundation of such ink paintings as his ‘Pine Trees’ that was begun in 1997 and completed in 2001 (fig. 2), only when we requested a painting from him for an exhibition that we mounted in our gallery in that year. Luo learned about Chinese painting mainly through his own efforts, and it may seem natural that he has a special affinity for painting of the Song era, the emphasis on reality and verisimilitude of which accords well with his original training in Western art. Luo Jianwu is now based in Beijing where he continues to pursue his very personal and individualistic version of the natural world. 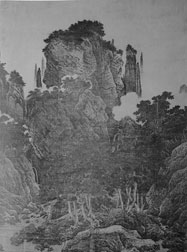