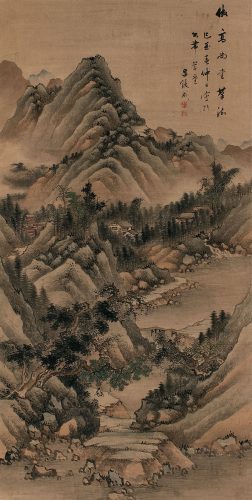 Inscription:
‘Done after the brush-model of Kao Shang-shu (Kao K’o-kung). On the second day of Spring of the year 1679, I painted this at the Yun-lu Study Hall. Lu Huan-ch’eng.’

Placed within a turbulent mountain setting, a figure of a scholar sits placidly on the bank of the stream, seemingly lost in contemplation of the natural setting. Following the river deeper into the picture we come upon a village with buildings nestled among pines, and then, rising above mist at their bases, serried peaks extend far into the distance. Strong light and dark patterns create visual tension throughout the work, emphasizing the calm figure by contrast. Brushwork is very assured, identifying the artist as a master of his craft.

Lu Huan-ch’eng, tzu Chi-wen, was born in Yu-yao, Chekiang province, during the year 1630 and is said to have lived to an age approaching eighty; his latest extant painting is dated to the year 1703, when he would have been 73 years of age. Lu became a specialist in both figure and landscape painting, and in those areas was strongly influenced by the masters of the preceding generation of artists working in Hangchou: Lan Ying (1585-1664 or later) and Ch’en Hung- shou (1598-1652). In later years Lu would work collaboratively with such other Hangchou painters as Chang Sheng (paintings dated 1654-1698) and Chiang Hung (paintings dated 1671-1690), both of whom were also strongly influenced by the achievements of Lan Ying. Although not much is known about the course of Lu’s career, he possibly served at the court in Peking during the 1690s as did such other artists as diverse in style as Wang Hui (1632-1717) and Wang Yun (1652-ca. 1739). Even today there are no fewer than sixteen paintings by Lu in the Palace Museum in Peking and eight in Tientsin, also in the north, while the Shanghai Museum has only five paintings by the artist.

Although Lu is known today primarily for his landscape paintings, and especially for those fantastic creations which form part of the milieu out of which came the Yangchou masters Li Yin (paintings dated 1676-1705) and Yuan Chiang (ca. 1670-ca. 1755), it is noteworthy that his earliest biography, that published about 1680 in the T’u-hui Pao-chien Hsu-tsuan, omits any mention of them: ‘Lu Huan-ch’eng, tzu Chi-wen, was born in Yu-yao. He excels in painting figures and flowers.'[1]