Inscription:
‘Presented to Ryoan on returning to his home country (of Japan).

With understanding manifested and his journey complete, his enlightenment dispenses with the dusty (world);

How can he depart with hoary locks while I mourn him sadly?

But a lofty ode is not superior to a song at the port, and what would interfere with a floating cup of fermented wine in spring?

On the broad waters sails are flying and the winds are strong and favorable,

Decorated with red and leaves of green, the shore resounds with the calls of wild geese;

Reaching home he will transmit his knowledge with poems and weighty boxes,

So as to repay the former sages, and thank the imperial court.

The eminent Japanese prelate Ryoan Keigo was born in Ise (modern Mie prefecture) in 1425 and died during the ninth lunar month of the year 1514. Joining the Rinzai order of Zen monks, with name of Tokei, he studied first at Anyo-ji in Ise and joined Tofuku-ji in 1440, becoming the Chief Abbot in 1487, with name of Butsunichi Zenshi. Emperor Go-Tsuchimikago (1442-1500) changed his original name of Tokei to Ryoan. In 1503 Ryoan was appointed by the Muromachi Shogun Ashikaga Yoshizumi ( 1481- 1508) to join an expedition to Ming dynasty China, but it was not until 1511 that Ryoan actually went. While in China Ryoan lived in Suchou for about six months and associated with many famous scholar-officials and artists of the day, honored for his learning and moral character as well as his age, which at that point was eighty-six. Ryoan exchanged poems with the famous philosopher Wang Yang-ming (1472-1529) as well as with the calligrapher and painter Chan Ho (also known as Chan Chung-ho), active during the early 16th century. When returning to Japan in 1513, Ryoan received poems from Wang Yang-ming, Yang Tuan-fu, as well as the present scroll from the official Lu Hsi-yu. Poems written for other Japanese monks returning home by such luminaries as T’ang Yin, Chu Yun-ming, and Chan Ho suggest that such was a common practice at the time.

The calligrapher here, Lu Hsi-yu, whose birth date of 1424 can be reckoned from the fact that he was eighty-nine years of age in the year 1513 when Ryoan returned home. The two men were only a year apart in age and the tone of the poem suggests that they were friends. In his poem Lu testifies to the successful completion of Ryoan’s studies in China, to his regret at Ryoan’s departure, and to the thought of joining him for a cup of wine at the port. Ryoan was clearly expected to share his knowledge and perceptions with those at home and also the books suggested by the ‘weighty boxes.’ The point of the trip and Ryoan’s hard work was to requite the sacrifices of previous generations and also to thank the imperial court and the shogun who had commissioned Ryoan to visit China. And Ryoan did in fact make great contributions to both Nanzen-ji and Tofuku-ji before his death in 1514.

The official Lu Hsi-yu had passed the highest level civil service examination in 1481 and subsequently served as Supervising Secretary in Nanking; his skill in calligraphy is clearly evident here. The strength and fluidity of his strokes find easy parallels in the works of such contemporaries as Wen Cheng-ming (1470-1559) (fig. 1) and Wang Yang-ming (fig. 2). Although not a well-known calligrapher today, his ‘Poem for Ryoan’ earns Lu Hsi-yu an honorable place within the pantheon of Ming calligraphers. 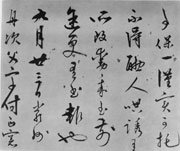