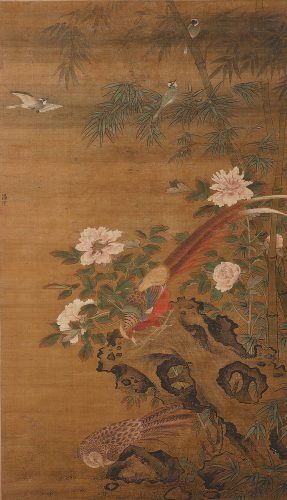 A male pheasant of striking physiognomy stands atop a garden rock , his prominence ensured by color, placement near the center of the picture, and sheer visual interest. Peony blossoms surround him as though forming a natural aureole and create vertical compositional lines to balance the diagonal orientation of the bird. His female mate browses below while other birds fly above and perch in the strong bamboo that frames the right side and top of the picture. The drawing of the forms mark the artist as a true master as does the coloring and the well-organized but natural composition.

The pheasant often functioned as visual metaphor for an official in the civil service, while the peony, the ‘Queen of Flowers,’ was a long-standing emblem of wealth and distinction. Bamboo carried additional connotations, empty- heartedness or modesty as well as longevity, since it was evergreen. The painting thus served to convey a range of auspicious meanings while being, quite apart from those abstract ideas, a beautiful and very decorative object in and of itself.

Lu Chi was from Ning-po in Chekiang province. The region was famed from the eleventh century onward for its specialists in bird-and-flower painting, and Lu Chi was a worthy heir to that tradition. When still a youth Lu is said to have followed the style of Pien Wen-chin, a somewhat earlier court painter; Lu’s work was then seen by a famous Ning-po physiognomist, Yuan Chung- ch’e (1376-1458), who judged Lu’s work superior to that of Pien and subsequently had the young painter come to live with him. Yuan had Lu copy famous works by T’ang and Sung dynasty masters, an exercise which led to great improvement in Lu’s art. Several sources mention that Lu Chi sometimes added poems to his works, which would imply some degree of literary education, but only a single recorded painting, dated to 1489, bears more than a simple signature. His artistry is thus almost without exception presented in purely visual terms with naturalistically detailed and colored subjects appearing within strongly structured compositions of often very impressive size.

Probably during the Ch’eng-hua era (1465-1487) Lu was recommended to the court and was appointed to serve in the Palace of Humane Knowledge with other court-associated artists. The height of Lu’s career was reached during the following Hung-chih era (1488-1505), when the reigning emperor, Chu Yu-t’ang, appreciated not only his works but also his character and personality, which were described as being ‘moral, upright, and reverent.’ Under Chu Yu-t’ang, Lu was promoted to his highest official rank, battalion commander in the Embroidered Uniform Guard. High rank was in itself no guarantee of a luxurious personal life away from the court setting of one’s job, however. According to a poem written by Li Meng-yang (1473-1529), ‘Lu Chi the white-head had a gold incense burner at his side, but at the end of the day he returned home without money for wine.’ Certainly the greatest honor for a court painter came from the possibility of direct association with the emperor himself. ‘When responding to imperial commands to undertake work, Lu for the most part conceived his theme so as to introduce some precept; despite undergoing some restriction, (the finished painting) still preserved the original reference.’ Chu praised this unusual approach: ‘Lu Chi has the skill to manipulate his craft for the purpose of admonishment.’ The notion of the didactic value of painting was a very old one in China; its appearance at the court of Chu Yu-t’ang was at least partially due to the emperor’s desire to mold the character of the young heir apparent: ‘When the Wu-tsung emperor (Chu Hou-chao, 1491-1521) resided in the Eastern Palace (i.e before he ascended the throne in 1505), Chu Yu- t’ang addressed him saying: ‘The paintings of Lu Chi marvelously surpass the wellsprings of Nature itself; such pictures as ‘The Talented Listening to Admonitions’ and ‘Ten Thousand Years of Clear Purity’ are very much concerned with administration and are worthy to be handed down as treasures.’

Since Lu Chi is known today solely as a painter of bird-and-f lower compositions, it is worth emphasizing that one if not both of the paintings recommended by Chu Yu-t’ang to his son was a figure painting, as was one of Lu’s most famous works, the ‘Ten Classmates of the year 1464,’ painted in 1503 at the request of Li Tung-yang (1447-1516), then the Grand Secretary. In 1499 Lu and a fellow court-artist, Lu Wen- ying, collaborated on a painting at the behest of Chou Ching (1440-1510), then the Minister of Revenue, who invited nine of his friends to his Bamboo Garden in Peking on the occasion of his sixtieth birthday. These associations confirm the statements of Lu’s biographers that ‘the officials mostly respected him,’ but none honored Lu more than did Chu Yu-t’ang: ‘When (Lu) fell ill, (the emperor) inquired after his health continuously. (Lu) himself said: ‘To be so favored is difficult to bear, and this (portends) my death,’ and indeed he did die.’ Having been born perhaps as early as 1440 in Ning-po, Lu Chi died in Peking around the year 1505.

At least fourteen artists are said to have been influenced by Lu Chi’s style of painting, and he should thus be regarded as the founder of a major school of painting. His earliest follower was a fellow townsman named Hsiao Tseng, who traveled to the capital with Lu, lived with him for some considerable time, and was eventually also granted rank in the Embroidered Uniform Guard. Lu’s other recorded followers were all local painters, four from scattered provinces but at least nine, including six from several generations of his own family, from Ning-po. It is likely that members of this latter group produced most of the large numbers of decorative bird-and-flower pictures which circulated during the sixteenth century under the name of Lu Chi. At least 121 paintings attributed to Lu Chi were in the collection confiscated from prime minister Yen Sung (1480-1565), and large numbers of paintings from the school were also exported to Japan, where they played some part in the evolution of the Kano school style. Wang Shih-chen (1526-1590) noted the great popularity of Lu’s paintings during the lifetime of the artist, the local school of painters which subsequently met the demand for Lu’s work, and the ultimate decline in critical estimation of the style: ‘At that time (Lu’s works) were extremely prized and valued but today, because of the changing taste of the times, they are in gradually decreasing demand.’