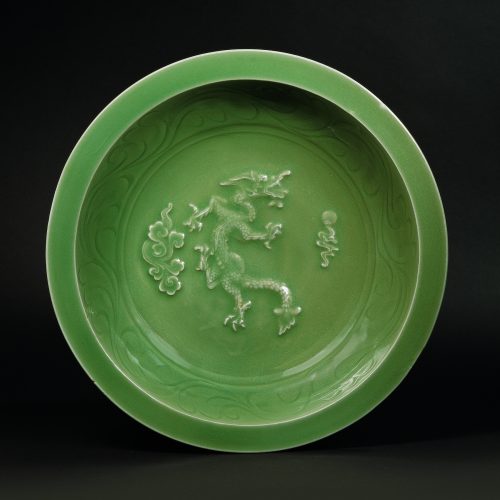 The large sturdily constructed dish was mold pressed to form the bold exterior design of lotus petals extending upward from the low incurved foot. A scaly dragon writhes in the interior of the dish, each of its large feet with four claws extended, one reaching out for a flaming pearl to the right, a beautifully articulated cloud scroll to the left. The dragon, pearl and cloud scrolls were mold pressed and applied to the raw body before glazing and firing. Shallow carved foliate scrolls stream wave-like around the cavetto. The bluish-green glaze is thickly applied, bubbly and opaque and produces sparkling white highlights where it drains from the high points of the relief design. The unglazed foot rim reveals the very light greyish body while the base is entirely covered with glaze.

Dragon-decorated dishes of this type have been found in archaeological sites from the Philippines and Southeast Asia to the Middle East where they are among the treasures of the Topkapi Saray Museum in Instanbul and the Ardebil Shrine in Isfahan, one of the platters in the Topkapi and the present almost exactly alike not only in the form of the dragon but with similar single very decorative clouds and a pearl trailing vapors afloat before the dragon’s snout.1 Such dragon decorated platters were even sent to a conservative Japan, where admiration and desire for Song dynasty celadons has never seemed to abate. Such platters were in fact recovered from a sunken Chinese cargo ship that sank off the Sinan coast of Korea en route to Japan during the Yuan/Kamakura period.2 At home, the powers of the dragon were legion, the creature lending its auspiciousness to the Chinese who used the dragon-decorated celadon platters in their lifetimes and in the afterlife as well as tomb finds reveal, exemplified here by a dragon-decorated platter from a Yuan tomb discovered in Guangdong province.3