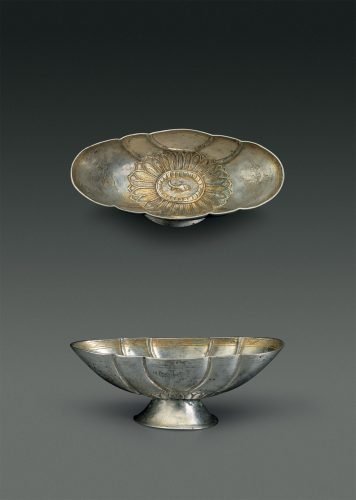 The silver cup is of elliptical, eight-lobed shape, supported on a high, flared, oval foot. The distinctive shape was formed when two bow-shaped deep grooves were hammered into the exterior of the long sides resulting in corresponding raised ridges on the interior and a total of eight lobes. A multi-petaled lotus blossom decorates the interior of the cup, the two layers of petals opened around the flower’s ovate center where a large fish with small fins and a giant bifurcated tail floats in rounded relief on an engraved wave ground. The fish is chased with scales and the petals with veining that approximate the actual appearance of lotus petals. On the interior at each end of the cavetto is an incised floral sprig surrounded by three trefoil leaves, all beneath a zigzag band below the mouth rim. The decorative motifs on the interior are all highlighted in gilt while the exterior was left in silver. Two rings of lotus blossoms in raised relief around the base of the cup where it is soldered to the foot correspond to the intaglio lotus on the cup’s interior. On one side of the outer walls of the cup are four characters scratched into the surface: Wangfu sanliang, “The princely household; three ounces.”

The oval form of the cup is an engaging variation that appears to have first become popular in the arts and crafts of China during the Han period when it was produced in lacquer, bronze, jade, and ceramic, with flanges on the long sides that served as handles, to form the so-called “earred cups.” The Tang dynasty renditions formed with elliptical lobes, however, did not have their origin in China’s past. Rather, the distinctive vessels were exotic and a result of the Tang infatuation with the West. The fingers of the Tang empire pointed in all directions, and one was on the pulse of Sassanian and early post-SassanianPersia, and merchants, especially from Sogdiana at the eastern-most end of the Persian empire, carried fruits and wine, metalware and glassware, armour and musical instruments across inner Asian thoroughfares to such Chinese metropolises as Chang’an in the north and Chengdu in western China, and by sea onward to Japan. Included were elliptical silver vessels (fig. 1) as well as glassware of similar form (fig. 2), the two examples here both preserved in the Shoso-in in Japan, a repository that was sealed in A.D. 756. Already during the Han dynasty silver artifacts from the Persian Empire had reached China, a trickle that turned into a greater stream feeding the Tang Empire.

It was not long before artisans in China took up the banner and produced silver wares that came to be numbered among the seemingly limitless accomplishments of Tang craftsmen. The exquisite artifacts from a hoard discovered in 1970 when a site for a building was being excavated at Hejiacun in Xi’an, demonstrates the adoption of shapes and decoration inspired by imported Sogdian wares and how the models were transformed under Chinese workmanship.[1] An example from the hoard, an interestingly fluted foliate bowl, is decorated on the bottom of the interior with a lion in relief on a wave ground related to the fish on waves of the present elliptical cup (fig. 3). A four-lobed ovate parcel-giltsilver bowl from an excavation at another village site, Beiyin in Yaoxian, also in Shaanxi province, is decorated in the well with a pair of fish (fig. 4). The paired fish are a Chinese symbol of connubial bliss and the use of this purely Chinese motif indicates some remove from the West Asian sources.[2]

Despite the great variety characterizing shape and decoration, however, a good number of piecesremained true to their foreign models as exemplified here by a cup formerly in the Carl Kempe collection (fig. 5), one in the Victoria and Albert represented here by a line drawing above that of a Sassanian cup that could have served as inspiration (figs. 6-7), a richly ornamented cup in the Art Institute of Chicago (fig. 8), and, finally, two cups from the Beihuangshan hoard in the British Museum datable to A.D. 877 (fig. 9). The present cup is, like these later Tang examples, decorated almost exclusively on the interior, unlike earlier Tang wares that were more usually decorated on both exterior and interior It was naturally from these precious-metal shapes that lobed and foliate ceramic forms blossomed, the most notable creations from celadon kilns in the south and white ware kilns in the north, exemplified here by a lovely Ding ware vessel from a royal tomb in Zhejiang province (fig. 10).

Fine quality silver vessels, objects and implements were important commercial commodities and extremely fine examples that we would expect to have been for imperial use or at least for the pleasure of the nobility in China werealso exported.[3] The characters on the side of the present dish, however, suggest it was for domestic princely use and the weight or size of the silver duly recorded.

3. For example, the exquisite silver and gold wares from the huge cargo of predominantly Chinese ceramics recovered from an Arab dhow that sank off the coast of Beilitung Island in the Java Sea in the 9th century; see Regina Krahl, John Guy, J. Keith Wilson, and Julian Raby, Shipwrecked: Tang Treasures and Monsoon Winds, Washington D.C. and Singapore, 2010, pp. 82-96. 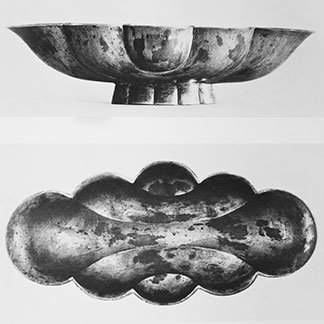 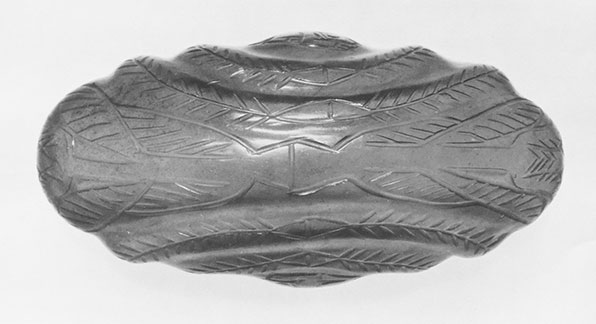 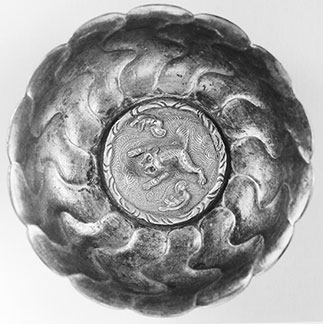 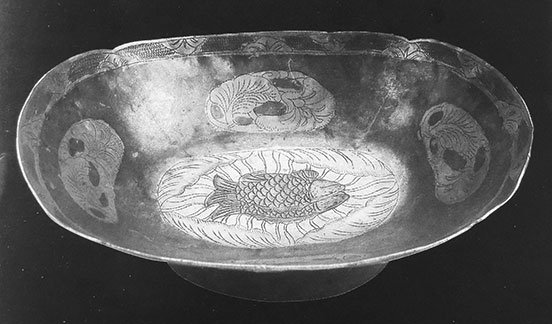 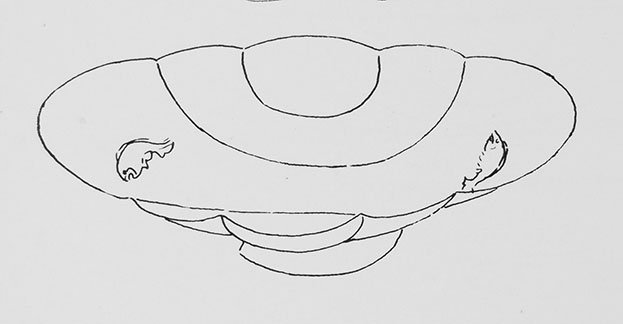 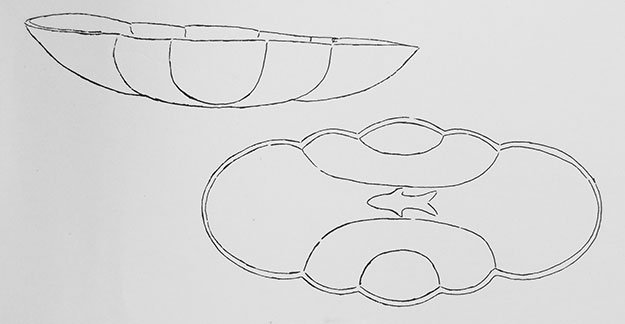 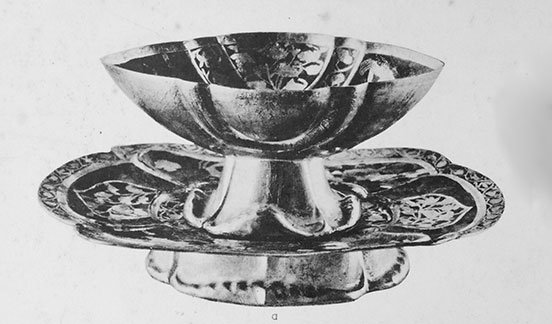 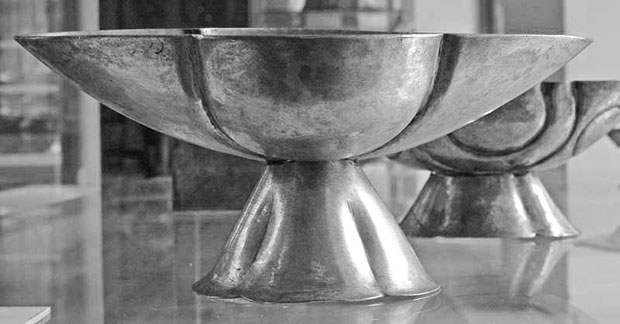 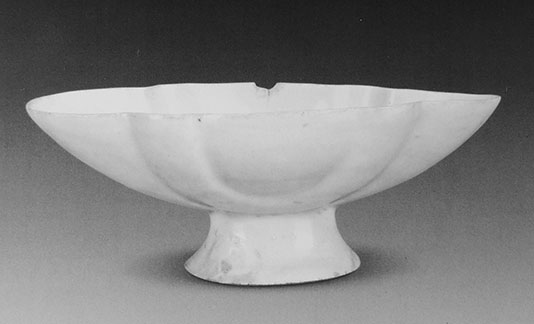