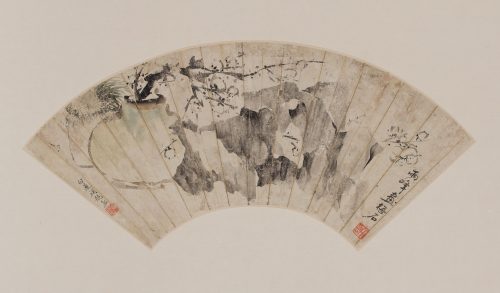 According to the inscriptions here, the blossoming plum and rock were painted first, extending across the surface of the fan and defining the basic composition. The containers were then added at the far left, presumably including the grasses, which are the same green-black color as appears on the vase to the front. The lack of defining color on the remainder of the painting works well with the silvered surface of the fan to suggest a courtyard corner viewed under moonlight. Although the pictorial elements are few, the formal relationships established between them are complex, creating an impression of yet greater richness held in reserve.

This fan is the result of a collaboration between one of the major Yangchou artists of the 18th century, Lo P’ing (1733-1799), and his wife, Fang Wan-i (1732-1779). Born into the eminent Fang clan in Anhui province, Fang Wan-i was well-educated before she married Lo and moved to Yangchou. She then continued to study poetry, with Shen Hsueh-tzu, and became well-known throughout the city for her verses. Her poem on ‘Enduring Hunger’ was written about by Lo P’ing, and among those adding colophons were Hang Shih-chun, Ting Ching (1695-1765), and Chin Nung (1687-1764). Fang in fact seems to have been well-known to Yangchou artists, and, for example, Cheng Hsieh (1693-1765) presented her with a painting on the occasion of her thirtieth birthday.

Fang also developed a talent for painting through study with her husband. The two painted together on occasion, and she is known to have used a seal on some of those works reading Liang-feng chih ch’i or ‘Wife of Liang-feng (Lo P’ing).’ Fang Wan-i is also to be credited with raising a very talented and well-educated family: three sons, the second of whom was given to Lo’s uncle for adoption so as to continue the uncle’s line, and two daughters, one of whom in later years would be her father’s companion in painting. A verse written by a friend describes the family during the 1770s:

Two Peaks (Lo P’ing) is the husband,
White Lotus (Fang Wan-i) the wife;
their sons are able to display
their poetry and calligraphy,
the deportment of their daughter
Fragrant Virtue (Lo Fang-shu) is correct.

In 1779, after twenty-seven years of marriage to Lo, Fang Wan-i died at the age of only 47. Mourned by many, her obituary was written by Weng Fang-kang (1733-1818), then a member of the Hanlin Academy in Peking. Her epitaph reads: ‘Ten thousand scrolls of blossoming plum, only a single White Lotus; her paintings are also Ch’an (Buddhist meditations), and her poetry is also Immortal (Taoism). My words are (ephemeral) like ice and snow, so I write on stone to preserve (memory of) her life.’