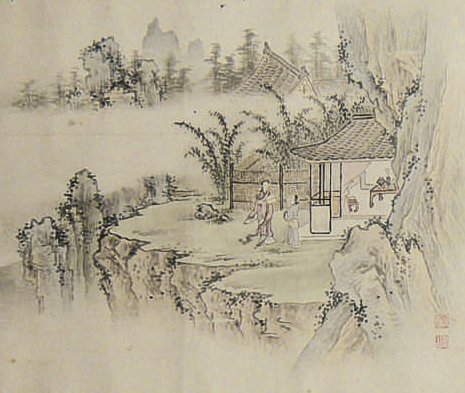 Poems and Paintings from the Kei River (Nagasaki) 1727 瓊江誤畫

Title: “Poems and Paintings from the Kei River.” Seal: Zhangzong chunqiu
(“Spring and Autumn in the palm of my hand”)

Alternating with twelve paintings are twelve 28-character
poems, each written in a different script style, each
followed by the poem written in standard script.

1) Returning Sails at Heavenly Gate in “Great Seal” script:
“Leisurely leaning at the mountain window, my eyes gaze
to the south,
where the vast ocean remotely connects with the
approaching Milky Way;
Goose feathers ride the wind one by one,
making clear the verdant mist returning from ten
thousand li.”

2) The Steps Situated at Kei in “Great Wind Essay” script:
“Ten thousand zhang of cinnabar steps approach the
Gate of Heaven,
where we found the wind’s brother, cold, precipitous,
and rugged;
Descending again we passed through Junping city,
and reported that the unyielding peak was an
offense against men.”
3) Lonely Reed-leaf Whistle at Barbarian Tower in “Depending Dew Seal” script:
“On Fan Island as autumn quickens, sounds begin
earliest,
at Barbarian Tower the darkness lightens, giving rise to mournful whistles;
Who knows as sounds crowd round, what events are being reported?
if the water rises we must notify those living far distant.”

4) Scene with Flute at the Floral Dwelling in “Water Cloud”
script:
“The Min and Yue overseas merchants live in mountain
lodges,
and climb the tower to play the flute toward Silver River; Cold and lonely in windy moonlight, and after encountering misty clouds,
the sounds stop and begin again, and bent-over willows are numerous.”
5) Trembling Peaks with Spiral Twisting in “Ancient Essay” seal-style” script:
“Trembling peaks accumulate kingfisher-blue with green on rocky hills,
the Jade Ladies cloud-like tresses are very damp with
dew;
Rain bathes the romantic but of dirt there is not a speck,
in Qu one doesn’t see the error of entering a dream.”

6) The Sound of Oars at Imposing Bank in “Hanging Iron”
script:
“Azure cliffs reach the water, and fish appear at the jetty,
in blue-green water sandbars are clear, in Xiang marshes
oars are heard;
One hears the boats at rest and the song of creaking
oars,
So take a grass rain-coat and a string of cash for a river
concubine.”
7) Gathering Fuel in Snow at Mountain Bridgein “Formal Repetitive Seal” script:
“The Rain Mother behind the screen rides the White
Rainbow,
within the white rainbow passes over the crane-feather
robed old man;
On one shoulder are pieces of firewood with coral-red
leaves,
if not Jiaoxian, it is Ge Hong.”

8) Frozen Mist over Green Baysin “Mosquito-leg” script:
“Looking west from the river pavilion the dense growth
is luxuriant green,
at the curving bank water is cloudy, produced by the
setting sun;
The moon rises slanted from horizontal but not
dispersed,
separated by several peaks from White-cloud Village.”

9) Picture Boats in Tranquil Harbor in “Wheat Kernel”
script:
“Layered peaks enclose valleys that are good at
concealing boats,
painted fish-hawks and colored banners cast doubt on
sea-side towers;
One doesn’t see the interrupted rainbow in the broken
river shadows,
or the sun in the flowing ripples and elegant rippling
waves.”

10) Startled Gulls on Returning Shores in “Flying White”
script:
“As the tide falls on spits of sand, terns sleep in warmth,
sounding oars disturb their dreams and they almost take
to the trees;
In vain does one view on a cloudy day snow on Yan
Mountain,
Snowflakes falling to and fro, all throughout the river.”

11) Boating in Moonlight on Peaceful River in “Misty”
script:
“On the river, Chang E was a beauty without peer,
I loose a single leaf, in accord with a pot of ice (i.e. clear
mind);
Not wishing to ride a carp (to officialdom), I aspire to
the abstract,
willing to become Baojun, in the end for a night of
pleasure.”

12) Sounds on the Long River of Bathing in Splendor in the “Model Nipple Seal” script:
“The scene seems like Wuling, spring-time in the cave,
with peach-blossoms smiling there and water flowing
over stones;
At the source one knows there is an elegant female
immortal,
one thinks to follow Master Liu and ask him the truth.”

Postscript by artist:
“During the Qing era, Sun Zifeng recorded in his Lichao
shengxian zhuanshu (‘Seal-script writing by the Immortals
of Various Dynasties’) one-hundred and thirty styles that
had been current for a long time. However, the soul of
the style of those characters came from dead ghosts, and
those who found them not easy to understand were
numerous. Today I thus wrote twelve styles that people
have heard of and can see.
During the first day of spring during the year 1727, the twelfth year of the Kyoho era, written in Nagasaki by the merchant-official Liu Yunding.” 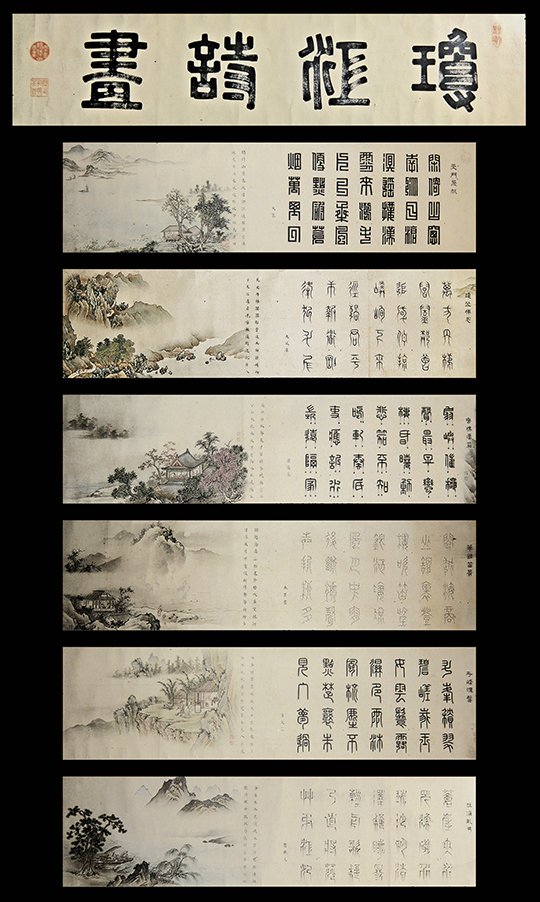