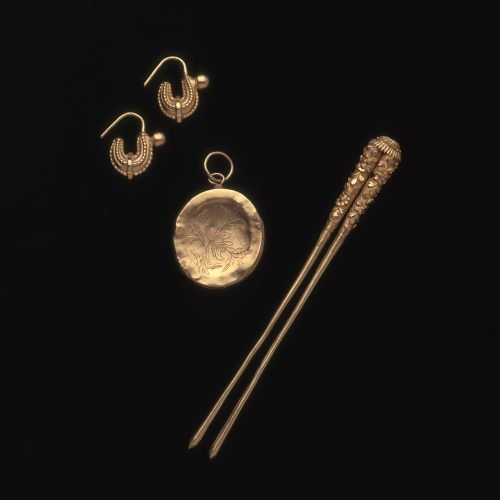 The hollow cast U-shaped earrings are bold in design with faux-beaded or pseudo-granulated borders, each divided by a quatrefoil flange encircling its midsection. Below each pierced-ear hook is a plain round gold bead that would be visible when worn. The slightly oval locket is etched on the front with a peony on a leafy branch and on the reverse with a lily, the sides edged with rows of fine bosses, with a small loop attachment on top fitted with a loose ring for suspension. The hairpin is double tined with the hollow tines soldered together at the top, capped by an oval sunflower, each tine with repoussé flowers including chrysanthemum, plum, magnolia and peony, above a geometric border.

The pair of earrings are typical of those produced under the Liao, found in Liao-tomb excavations and now in private and museum collections as well.1 Just as Tang-dynasty ceramic and painting styles migrated into the world of the Liao, so did the bold and chunky accouterment style popular during the Tang.

The locket and hairpin are datable to the Southern Song period in the 13th century on the basis, for example, of similar accouterment from the tomb of Huang Sheng (d. 1243) located in Fuzhou, Fujian province.2 The peony and lily blossoms convey the naturalism typical of Song design and the clustered blossoms on the hairpin reflect a status of luxury and wealth that the wearer would have enjoyed and been pleased to publicize in her dress and jewelry.