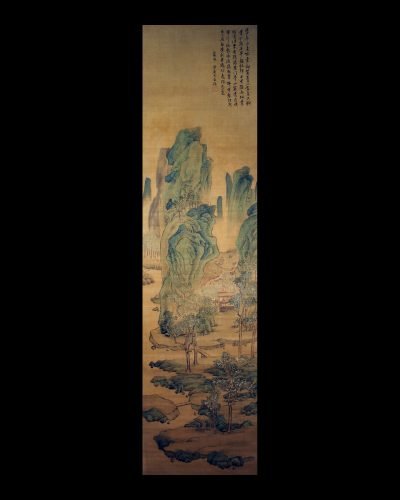 Artist’s inscription:
“Years ago I strove mightily for advancement,
shouldering books and sword I travelled the blue mountains.
My official career brought only discontent,
and for ten years I never smiled.
My old village is a thousand li distant,
in silence I live among cassia trees.
Coming and going are monkeys and deer,
and my brushwood gate is usually not closed.
Enclosing my house mountains rise up,
submerged shadows float in the river current.
Taking up a brush so as to draw my feelings,
these are exhibited during this clear leisurely day.
Keeping my eye on the autumnal blossoms as they fall,
the poetic soul alone is first to return.
Liang Ji from Suzhou painted and inscribed this.”

Flowering trees shade a viewing pavilion set on a midground area reached by a bridge over a meandering stream. Another foot-bridge connects with the middle ground where a villa stands behind a brushwood fence. Tall peaks crowd the remainder of the picture, their elongated forms and distinctive configurations swaying as if to music. This otherworldly scene is supported by the coloring, mineral blues and greens that conjure the fairylands of ancient stories and tales.

When viewing a painting brightened with blue-and-green mineral pigments such as here, whatever the format, composition or subject matter, reverberations from the past come rushing to the fore, and we are in the presence of Li Sixun (651-716) and his son Li Zhaodao (active 670-730), masters of the blue-and-green style they established during the Tang dynasty. Yet, more important than the ultimate source or the nature of the style–its meticulousness and ornamentalism– is to what ends successive artists put that style to use and how they articulated their visions. Here it is a romanticized version of the world of the retired official, or perhaps the actual world of Liang Ji, which he describes in his poetic inscription.

The artist, Liang Ji, is not recorded in standard biographical texts but from his inscription here we know that he came from Suzhou. The style of the painting would suggest a dating to the later 18th century.