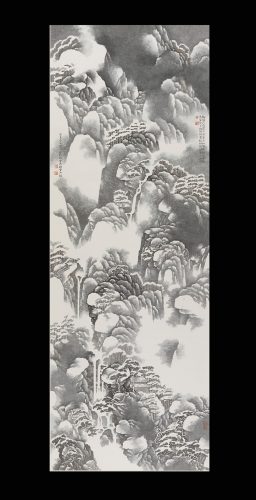 Artist’s inscription on left:
“On a winter day during the year 2003, Xubai did this in the Cloud-harking Retreat in Canada.”

Artist’s inscription on right:
“Snow whirls and falls,
This year is already ending.
Jade steps and chiseled balustrades,
Frozen rivers and snowy roads.
Qiang flute sounds leisurely,
Where is my home-town?
Pine trees and cypresses wither last,
They are green as ever.”

The crystalline forms of Li Xubai’s winter landscapes serve admirably to evoke a sense of cold so severe that it impedes the flow of sap in trees, stills the movement of water, and quiets all sounds of human activities. Born in Fukien province in China, but now living in Canada, and experiencing the winter season personally, Li responds to the outer reality of his physical and psychic environment and embodies his perceptions and conveys these to others, using a visual language that communicates clearly and is held to express fixed meanings.

The Chinese have long regarded literati painting as an act of self-cultivation, with attendant assumption that the image resulting from the act is embued with the character and personality of the artist. The moods, ideas, and feelings found in the paintings of Li Xubai are thus to be taken as emanations of the artist himself, given equally vivid expression in the disciplined structures of his paintings, and on this basis we can conclude that the artist is a man of character and rectitude, one whose often profound thoughts are couched in terms of transparent complexity and melodious counterpoint.

Many of the paintings of Li Xubai are large in scale and conception, and structure is primary, an expressive element in its own right as well as that which defines the formal rhythmic, tonal and thematic relationships between the pictorial and verbal components of his striking works of art.