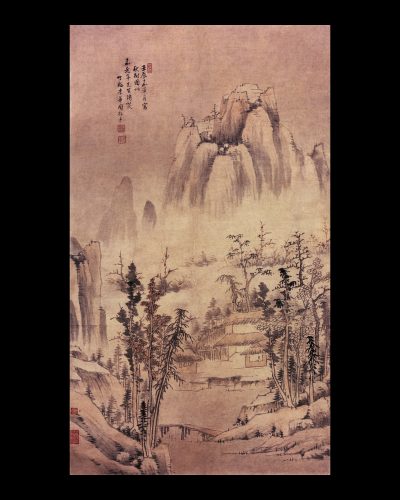 Inscription:
“During the twelfth lunar month of the year 1702, I painted this picture of ‘Autumn Trees’ and presented it to old master Jia in order to elicit a smile. Li Huaguo, called Zhuxi.”

Artist’s seals:
Li Huaguo zi xifu; Zhuxi; and one other

A river separates the foreground from a middle ground on which appears a house surrounded by trees. Mist then covers the interval between the house and the distant mountains that rise above and crown the scene. Much of this approach to composition can be associated with the artist’s exact contemporary, Wang Yuanqi (1642-1715), whose “Landscape after Wu Chen,” 1702 (fig.1) displays similar trees, overlapping units to build up the mountains, and the use of mist to mask transitions from one area to the next. Warm tones of colored wash create a soft and welcoming ambiance for the approach to the scholar waiting in his house.

Li Huaguo, zi Xichi and Xifu, hao Zhuxi laoren, was from Jiangling in Hubei province. Early in the Kangxi reign-era (1662-1722 Li received the military jinshi degree in Beijing after passing the Palace examination as the number three candidate. Rather than proceeding to an illustrious career, however, Li Huaguo was dismissed and sent home when he proved incapable of forceful leadership.

Li then became famous as a landscape painter and was known as well for his optimistic personality and genial character. Although unsuited for the military life, Li was clearly valued by his friends; Zhang Geng, his early biographer, noted that Li “had no conflicts with others. He lived to an age of more than ninety…” If Li Huagua was about age thirty when he received his degree, he would have been born during the early 1630s; his death would then have occurred during the early 1720s. 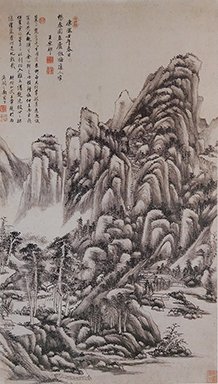