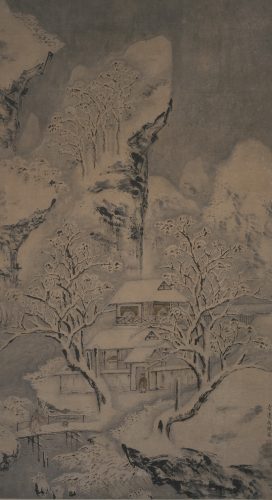 Inscription:
“Painted by Li Ta with his fingernails.”

A warmly-clad scholar with staff and accompanied by a dog crosses a bridge as he walks toward an extensive villa, at the gate of which the host waits to greet his visitor. Leafless trees surround the house and perch atop the rocky cliff which rises precipitously behind to provide additional shelter. Most interesting are the techniques by which the image was created. Much of the background was washed in with wet ink, leaving the white ground of the paper to create the illusion of a heavy snow-fall covering the pictorial forms. And while some of the lines were drawn with a conventional brush, others, more scratchy and spontaneous, indicate as does the artist’s inscription that they were done with the balls of his fingers or the split end of a fingernail. The result is an image that is spontaneous, lively, and decidedly unconventional in effect, something quite difficult to achieve when the artist was working in a pictorial tradition already more than two thousand years old.

Li Ta was born in Shun-t’ien, the modern city of Beijing. His earliest biography, the Tu-hui Chi-lueh, records that “he was capable in painting landscapes and flowers, the bigger the scroll the more wondrous the spirit. He once lived with Kao Ch’ieh-yuan (Kao Ch’i-p’ei) and came to a deep understanding of his method of washing with ink..” Kao Ch’i-p’ei (1660-1734) was serving in Beijing during the 1720s as junior vice-president of the Board of Punishments and it is likely that Li Ta lived with him at that time. Known especially for his finger-nail painted works, Kao frequently relied on assistants for certain aspect of his own paintings, such as the initial wetting of the paper and the addition of brushwork and some wash to his finger-inked inventions, and Li Ta may be regarded as having been among those very gifted collaborators.