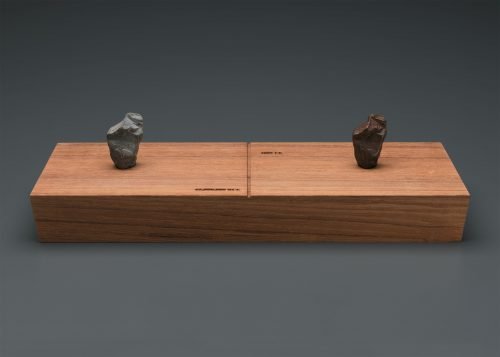 Two small objects, one a stone thrown up by the earth some 70 million years ago, the other a bronze replica cast within the last few years. Together, along with ten similar pairs, they comprise a work entitled ‘Stone Journeys.’ While the journey began with the birth of the stones, we pick it up with the discovery and retrieval of the stone in New Zealand by the conceptual artist Lee Mingwei, follow it to their replication in bronze in a workshop in Taiwan, and now provide a rest stop at Kaikodo in New York, where one pair is on view. However, unlike other works in the present sales exhibition that will become the property of the buyer with no strings attached, the artist here has imposed a most interesting qualification before ownership can be achieved. At some point in the future the owners of one or all of this set of eleven are requested to divest themselves of one of the pair, either the found object or its bronze replicate.

Lee Mingwei himself best explains the origins of this intriguing work of art. ‘Recently, while visiting New Zealand’s south island, I was awed to discover the Porporai River Valley, a wonder of nature sculpted by glacial movement 70 million years ago. That glacier also produced millions of smooth round stones, which now line the river’s bed, stones which I found unusually cool and soothing when I held them in the palms of my hands. While picking up 11 of these stones as souvenirs, I suddenly realized that simply by taking them out of the river I was changing their circumstances forever. When I returned to Taipei, I had each of the 11 stones cast in bronze, yielding 11 pairs, one original and one bronze replica.’

Acquiring a pair of these objects, however, is not as simple as might first appear; there is a further obligation for the owners to act, on principle, in such a way that they will be forced to decide which they keep, the natural stone or its replicate? Which is most desirable to them? It is by such means that the artist, Lee Mingwei, seeks in all of his projects to expand the limits of our aesthetic consciousness. According to Mingwei, ‘This project centers on two ideas. First is the notion of ownership. What does it mean to own something, either natural or manmade? Second is the concept of value. Which stone is more precious, the natural stone or the fabricated one? I ask those who become the owners of these stone pairs to decide when, where, and how to discard one of them, a decision involving considerations of ownership, control, value and loss. It is this decision-making process that I believe to be the heart of the project, not the stone pairs themselves. Some owners may find themselves unable to part with either the natural or the metal stone, in which case I would ask them to pass that decision along to their heirs. In some cases, over time, one or both stones might be lost unintentionally—to children’s play, to accident, to destruction—and both decisions would then have been made by forces beyond the owner’s control. What might the owner feel about such an event—loss, relief, resignation? I have created an accordion notebook for each of the 11 owners to use as a diary of their thoughts and struggles in regard to the obligations I ask of them as part of this project.’

The artist here invites all of us to confront several related questions. 1) First is the nature of art itself: do only individuals create it or can it derive from nature without human intervention? 2) Does an exact replication in another material of a natural phenomenon qualify as creative art? When Rodin’s ‘The Age of Bronze’ was first exhibited, the artist was criticized very strongly by those who believed he had simply cast a living model. 3) Which object should be valued more highly, the found stone or its replicate in bronze? Having been replicated in bronze, the question of the value of the original stone here is magnified greatly. The visages of great statesmen are recorded in bronze, lesser exemplars having to make do with stone, but how does this duplication, in a more costly and precious material, affect our perception of the original? Ordinarily, in the art world, we all would prefer the original to a copy of it, but is that true in this case? Which is most desirable? It is by such means, by inviting us to consider possibilities and consequences that the artist, Lee Mingwei, seeks in all of his projects to expand the limits of our aesthetic consciousness.

Like all conceptual artists, Lee Mingwei argues through his creative projects that the concepts or ideas embodied in the work of art take precedence over traditional concerns, forcing us to question and confront the nature of art itself. Lee creates both participatory installations, where strangers can explore issues of trust, intimacy, and self-awareness on their own, and one-on-one events, where visitors explore these issues with the artist himself through eating, sleeping, walking and conversing. Lee’s projects are often open-ended scenarios for everyday interaction, and take on different forms depending on the participants. Time is central to this process, as Lee ’s installations often change during the course of an exhibition. Lee’s work has indeed expanded the significance of the present exhibition Magnificent Obsessions, as he invites us to participate in one of his.

1. Lee Mingwei was born in Taiwan and currently lives in New York, with frequent trips to many exotic parts of the world. Since receiving an MFA degree from Yale University in 1997, Lee has had solo exhibitions at the New York Museum of Modern Art, Whitney Museum of American Art, Brooklyn Museum, Isabella Stewart Gardner Museum, Los Angeles County Museum of Art, Museum of Contemporary Art Cleveland, Taipei Museum of Contemporary Art, Queensland Gallery of Modern Art and other venues. He has also been featured at Biennials in Venice, Lyon, Liverpool (2007, 2010), Taipei, Echigo-Tsumari, the Whitney, and at the Asia Pacific Triennial. Currently he has projects at the Smart Museum, the Isabella Stewart Gardner Museum, Espace Louis Vuitton Taipei, and is preparing projects for the Sydney Biennial, the Shiseido Gallery in Tokyo, and the European Capital of Culture in Guimaraes.