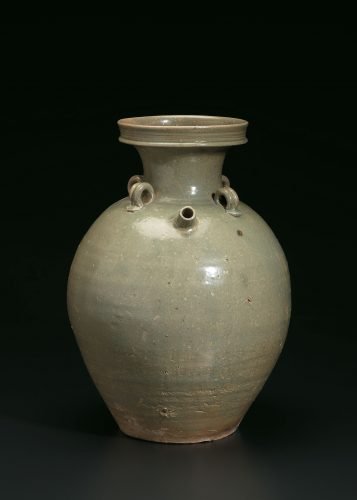 Of extraordinary size, the jar is of expansive ovoid form, curving gently to the cylindrical neck which splays gracefully to the dished mouth circled with groves. Four double-strand loop handles are pressed high on the shoulder at the base of the neck. A short faceted tubular spout is affixed lower on the shoulder midway between two of the handles. The thin greyish—green glaze covers the vessel inside and out, pooling to a pale blue color where it collects on the rim and exhibiting dark-colored iron spit outs and specks, small breaches and tiny cracks. The unglazed base displays circular marks on the light grey stoneware body from the turning wheel and random reddish-orange burn marks are visible from the firing.

Two celadon jars, one excavated in Zhejiang province from a tomb datable to A.D. 483 (fig. 1) and the other excavated in Hubei province from a tomb datable to A.D. 485 (fig. 2)—each burial occurring during the short reign of the Southern Qi dynasty (A.D. 479-502) and within only two years of each other—are diametrically opposed in style , yet together they answer questions concerning features and dating of the present vessel. The jar from Zhejiang is clearly typical of the products that developed at the Yue kilns in Zhejiang province directly in the tradition of their A.D. 3rd-4th century predecessors, what we might call ‘old Yue ware.’ The piece is a light grey stoneware, undecorated and covered with a thin, relatively matte glaze of irregular yellowish-green hue and with surface blemishes evident both from burial and from firing. The jar was fitted with a pair of single-loop handles pressed onto the upper shoulder on two opposite sides and the cylindrical splayed neck is surmounted by a broad, waisted mouth. Aside from the elongated form of its body, it is really indistinguishable from earlier wares.

The vessel from Hubei, in contrast, is a very light, whitish-grey stoneware and fully decorated. Incised floral scrolls and high-relief lotus-petal motifs fill the surface which is further covered with a glaze that was very fluid in the firing, dripping into thick globules at the bottom of the vessel, a glaze that is clear, bright and glassy. The vessel is further equipped with four pairs of very distinctive double-loop handles, that is, the loops were each produced from two cords of clay pressed together.

While Yue-ware ceramic technology and stylistic influence moved northward from its southern home centered in northeastern Zhejiang province from at least the 5th century A.D., stylistic influence was, in reverse, moving southward from kilns north of the Yangzi River, from Shandong, from Henan, and from Hebei. The sculptural style, apparent in the vessel from Hubei—note its lotus petals and throne-like configurations—manifests the potent effect of northern Chinese Buddhist sculptural art on ceramics being produced in some of the same environs during the period known variously as the Six Dynasties or the Northern and Southern Dynasties, referring to China during a chaotic political and military tug-of-wars between the fall of the Han in A.D. 221 and the reunification under the Sui in A.D. 589.

A number of Yue wares of the later Six Dynasty period decorated cautiously with faint bands of lotus petals, for example, are results of this influence, as seen for example in a jar excavated in Zhejiang province (fig. 3), and it can be assumed that the double-loop lugs or handles on the present Yue jar, an isolated occurrence of that particular northern appendage form in the south well before it became fashionable there, was also a result of this influence. In addition, such large jars as the present are not commonplace in the extant Yue-ware repertory. However, the full-bodied shape of this gentle giant, in comparison to more usual late Six Dynasties period Yue vessels, anticipates the more buoyant shapes that will become one hallmark of the aesthetics of Tang-dynasty ceramic forms. The combination of spout with a quartet of handles arranged high on the shoulder effectively draws one’s attention upward, towards the stabilizing cup-form mouth, also anticipating the Sui-Tang period Yue-ware compositions in which decorative elements are sometimes clustered at the base of a vessel’s neck. At the same time, the simplicity characterizing one main line of production of old Yue wares, in which straightforward forms and an absence of decor were keynotes, streamed into a Tang frame of mind that shared that aesthetic sense. 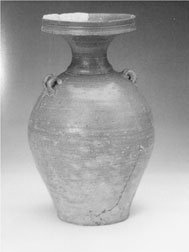 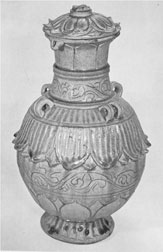 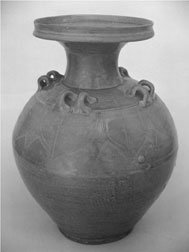