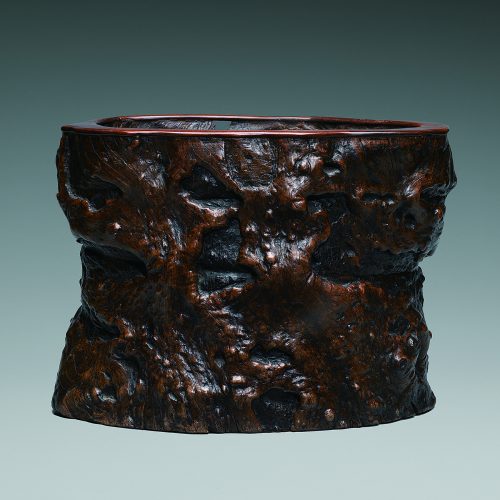 The wooden vessel here is larger than usual brushpots as it would have been fashioned primarily to hold rolled up scrolls, even though the Chinese man or woman of letters might have used it for other articles as well. Having it on view in the study, whatever its function, would have added a touch of the outside, of nature, to the scholar’s enclosure, even if had been worked or manipulated to enhance its appearance. The gnarled trunk is accentuated with knotholes, an open crevice on one side, and a natural hollow opening below the rim. A clear lacquer coating intensifies the natural color and preserves the surface. The top is applied with a finely finished and polished form-fitting rim of five pieces of hongmu (“red wood”) with carved rounded edges.

It appears, based on evidence from painting, that scholars’ furniture made from tree roots came suddenly into fashion during the late Ming era particularly within the Jiangnan area of Jiangsu province. This corresponded to an enthusiasm for bamboo carving as well as brush and scroll pot creation associated with the burgeoning middle class, which aspired to scholarly status through participating in scholarly activities and possessing appropriate accoutrement. The present root wood scroll pot thus combines two preoccupations of the scholarly elite in late Ming times, whose interests persisted into the Qing.

The description of a similar wood vessel of comparable size in the Mengdiexuan Collection captures in a few well-chosen words the essence of these intriguing vessels and is worth quoting here: “This gigantic scroll-pot conveys a sense of grandeur similar to that of flowing clouds, shifting winds, rolling waves and flowing currents. It contains the literary and artistic worlds of its owner, which also serves as a source of inspiration.”1

1. See Enlightening Pursuits: Scholar’s Objects from the Mengdiexuan Collection, University Museum and Art Gallery, The University of Hong Kong, 2006, p.162 and the scroll pot no. 57, p. 163.