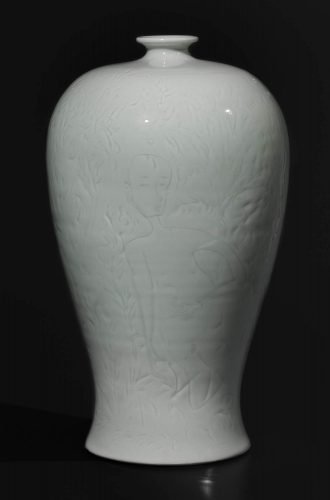 The colossal white porcelain meiping, thrown by a professional potter in Jingdezhen, rises from a slightly flared foot to the high shoulder and is surmounted by a small neck terminating in a rounded lip. The expansive planar curves of the vessel provided a perfect surface for Yu Peng to carve his signature male figures amid rock, bamboo and foliage before the vessel was glazed and fired. On one side, an impressively large nude male figure kneeling with one foot extended peers out of his matrix of porcelain while on the reverse a smaller male nude kneels with his head bowed. The figures are incised in a fine-line style whereas the background foliage is more impressionistically carved. The vessel is covered overall by a clear glaze with a slight greenish tint and a mirror-like gloss. The shallow intaglio incising and carving are brought into greater focus as the glaze collected and is deeper in tone in the recessed areas. The wide foot perfectly stabilizes the large vessel.

We are accustomed to meeting with Yu Peng’s family of figures–comfortably nude, less comfortable when dressed, in the high rocky mountains, deep valleys and crevices, in the gardens, the temples, and humble domiciles of his personal world.1 Some of the wraith-like figures almost extra-terrestrial in appearance are truly anything but; they are embraced by their earthly domain where niches miraculously open up for them in the scarps climbing the paper from top to bottom, or where they are arranged within it as if they were simply its natural elements, like the leafy plants, the bushy or desiccated trees, the scattered stones.

These figures and their environments were easily accepted into the world of porcelain, like ghostly tattoos on the skin of the meiping. Yu’s figural style in painting, characterized by simple clear outlines with only minimal details, sometimes with the use of color to garb a figure, transferred perfectly to the medium of porcelain where a sharp tool substituted for a soft brush in producing these visions.

Where some would find a salacious element in the nude images Yu conjures, others might recognize the absolute innocence and purity of the naked bodies, stripped down, natural, naive. Indeed these qualities exist at least in those images which represent Yu Peng’s own sons, his family, and perhaps himself. We know that the complexities of Yu Peng’s life were plumbed for the sake of his paintings, which exist as extraordinary expressions of material, natural, and spiritual worlds combined, but in a way that is unique to Yu Peng.

Rarely in the history of Chinese ceramics are the individual potters or decorators known to us. Their craftsman status has always been at odds with their actual artistic production. While most of the workers associated with the industry normally functioned only as the technicians who turned plans and ideas into reality, others were the designers, the “idea” people, the “artists,” and among them now and again a creative genius. An interesting exception occurred during the Ming dynasty when members of the educated elite lent their ideas, enthusiasm, and actual designs to the potters of Yixing wares in collaborative efforts to produce vessels for tea service or for the scholar’s objects that still intrigue us today. The present artistic production is, in a way, a part of this rare tradition as Yu Peng updates a traditional Chinese ceramic form, produced as a canvas just for him, with slender dream-like figures. At the same time, the elegant meiping draws Yu Peng into its own great tradition.