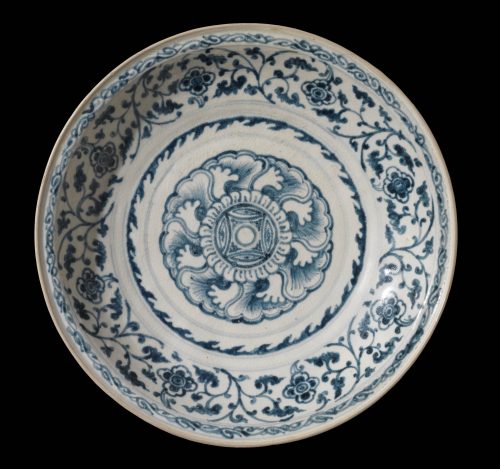 The substantial dish is of deep form made of dense stoneware. It is decorated in the center of the flat-bottomed interior with a cash medallion surrounded by a petal collar and overlapping abstract frilled peony petals skewed in a clockwise orientation. A narrow wave border painted with a more intense cobalt blue encircles the center between faint double lines. Eight four-petaled small blossoms on scrolling leafy vines, all in bold blue, fill the cavetto beneath a “classic” scroll on the upturned rim. The underside is freely painted with large frilled overlapping peony petals, similar in design to those on the interior, radiating from the foot. The square-cut foot surrounds the flat unglazed base that was treated with a brown wash. The stoneware body appears light grey in color and is very smooth in texture.

Our knowledge of the birth, development and dating of Vietnamese underglaze-blue decorated wares is based primarily on some reasonable assumptions. We assume that Chinese underglaze-blue decorated porcelain provided the stimulus for the production of blue-and-white wares in Vietnam. This would have come by way of exports ranging from high quality to more mundane products of kilns primarily at Jingdezhen. Whether it is likely that migrant Chinese potters contributed to this new 14th-century industry is arguable. Some kiln sites which produced blue- and-white wares in the vicinity of Hanoi, remains of which have been discovered in recent times, as well as kilns still active today, are said to have been in production by the 15th or 16th century. A pre-16th century underglaze-blue decorated Vietnamese ceramic that actually bears a date is the well-known bottle in the Topkapi Saray Museum in Istanbul, dated to 1450 . It is all the more important given the absence of reign dates on Vietnamese wares. While displaying strong reference to earlier Chinese porcelains, such features of the bottle as its shape, the composition of the design, and certain details of design display local characteristics, or a local flavor that appears to have characterized the blue-and-white Vietnamese wares from the very outset. A plate with a far more swiftly painted, casual, and slick design obviously represents a quite different approach to the decoration. This style was especially prevalent in the 16th century when foreign export, to Indonesia and Japan for example, required increased and, as a result, more speedy production.

The style of decor of the present piece falls between these extremes. The choice of motifs, similar to other dishes of like vintage, are quite idiosyncratic and usually quite distinguishable from the Chinese in their softly brushed geometric and highly-patternized organic designs.1 Among some noteworthy features are secondary motifs such as the cavetto floral scroll on the present piece. The leaves still resemble the classic lotus scrolls of Yuan and early Ming China. However, the lotus blossoms ubiquitous in the Chinese wares are replaced in the Vietnamese products by a domestic looking four-petalled blossom producing a very different effect from the Chinese. A concert of decorative designs and manner of presentation then make the Vietnamese wares very recognizable and distinguishable from the Chinese. Therefore, when one confronts a Chinese blue-and-white dish that is remarkably like the Vietnamese wares and is so strikingly outside of the usual Chinese tradition, one is prompted to consider the possibility of Vietnamese influence on its great neighbor to the north.2

However, when faced first-hand with such dishes, a most significant aesthetic difference is evident, one that was an inevitability, and one due to a simple technicality. The Vietnamese wares were made from a different material: they are not porcelains; they are stonewares. As such, these ceramics produced to the south of the Middle Kingdom would always have that special sturdiness and warmth that distinguishes stonewares from porcelains and which is so evident in the present dish.