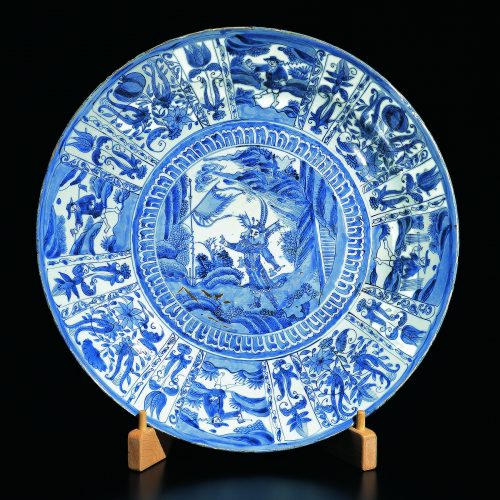 The platter is of ample size with rounded sides rising to a wide, angled rim. In the center of the platter a bearded warrior dressed in elaborate battle garb, including a distinctive double pheasant-tail headdress, strikes a dramatic pose with a small hatchet in one hand, another hatchet at his belt, and one hand thrust forward. His clothing is depicted in great detail and his face carefully characterized with broad nose, bushy eyebrows, wide eyes, and clearly depicted eyelashes. Poised to advance, he stands in the midst of a chaotic landscape setting between a wind-blown banner and a rocky riverscape where a planked path ascends the rocky face of the mountain. The scene is contained in a circular window framed by an overlapping-petal collar reserved on a blue ground. The cavetto is divided into alternating broad and narrower panels. Four of the panels, at the directional points, each contains a figure of a fisherman or wood gatherer striding through well-developed landscape settings. These alternate with flamboyant floral panels and narrower panels decorated with tulips. The underside is more simply decorated with four ogival panels filled with flowers separated by the “Three Friends” (bamboo, prunus and pine) so speedily brushed that the forms are almost abstract. The underglaze cobalt is a vivid purplish blue color. The base has burned brownish in areas and displays chatter marks. Kiln grit adheres to the incurved foot rim.

By the last decade of the Ming and transitioning into the Qing, a group of large kraak platters was produced with quite idiosyncratic design elements, setting the group apart from its predecessors and contemporaries. These wares have been categorized in an in-depth study as comprising a type designated as “Border IX” dishes: “This border is divided by straight lines which form sections varying in number and size……The peculiarity of this border is that it blends typical kraak paneled borders with Transitional style motifs, such as descriptive scenes with people in a landscape and a number of flowers peculiar to these wares. These are usually referred to as tulips, yet many varieties of flower are depicted…….Flower scrolls replace the diaper motif as a border around the centre medallion. Diapers as a rule no longer appear in this group. Figures-in-a-landscape is the principal motif that appears in the centre medallion..”1

Among the large platters produced with this distinctive style of decor in the Topkapi Saray Museum in Istanbul is one with a central figure positioned much like the present in the center of the medallion and also with a plank construct that is used as fence or balustrade in front of the figure.2 The cavetto panels are also strikingly similar to the present, containing peasant, angler and wood gatherers in landscape settings and containing similar floral panels. The exterior of the Topkapi dish is described as having flower medallions between narrow panels of prunus, bamboo and pine, which would also correspond to the present dish. A platter in the Groningen Museum is decorated with a scene depicting two male and two female figures in a more dispersed landscape setting but with the frame of overlapping petals circling the central medallion identical to that of the present dish.4 The cavetto figural and floral motifs are also similar as is the exterior which is not only similar in the floral ogival medallions that appear there along with simple renditions of the three friends in the narrow panels between them, but both dishes manifest a miscalculation that resulted in two of the large panels being adjacent to each other without a narrow panel between.

The floral motifs on this group of dish are especially engaging. In the narrow panels tulip-like flowers are depicted. The tulip was introduced to Holland from Turkey in the 1630’s and had become part of the kraak decorative repertoire by the end of the decade. Carnation-like flowers which are also a western introduction to Chinese design, appear in the floral arrangements in the cavetto panels and the floral designs overall bear striking similarity to 16th-17th century Iznik pottery tiles produced in Ottoman Turkey, designs would be quite appropriate for the Western and Middle Eastern markets where such ceramics were sold in the 17th century.

Finally, such features as the alternating dark and light bands of the mountains and land forms in the porcelain’s decoration relate to late-Ming landscape painting while the path on the left side appears to have been produced with at least a vague understanding of perspective drawing, a concept and technique also known to the painters of the late Ming period. While these extraordinary export porcelains were destined to travel westward, it was to their advantage that decorative ideas and modes of drawing had journeyed from the west to their shores first, providing tools for yet another new and up-dated look to add to the immense body of wares known as kraak.