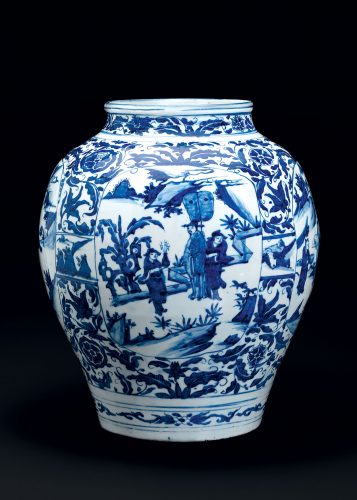 The heavily potted jar is of wide-shouldered ovoid form with short neck, rounded lip and wide mouth and is supported on a thick foot surrounding the recessed base. The body of the jar is decorated overall with a complex program consisting of four large, roughly oval panels on a scrolling floral ground punctuated by individual clumps of foliage. The garden and landscape scenes within the lightly outlined panels are conceived as pairs, the members of each pair occupying opposite sides of the jar and each frequented by human figures. The first pair of panels focuses on a gentleman in scholar’s hat and robe standing in a garden with an attendant holding a fan above him. On one side (main image opposite) the gentleman is being presented with a vase containing three halberds, and on the other an object that might be identified as an ingot-shaped pillow is being offered to him by a kneeling attendant (view a). These light dramas are played out in gardens partially enclosed within short walls with fantastic rocks and banana palms, smaller rafus palms, and additional foliage all beneath overhanging rocks and swirling clouds, one scene with the moon visible above. The second pair of panels is united by massive overhanging bluffs surrounded by swirling clouds and each with the moon partially visible above the scene. These panels differ from each other inasmuch as in one panel the scholars are standing (view b) and in the other they are seated (view c). In the first, the gentlemen, awaiting a youth approaching with a fabric wrapped qin or lute, are each holding a folding fan that is opened, one displaying a lovely painted floral spray. On the opposite side the figures are seated, one with a fan, the other with an open book The oval panels are linked to one another by further narrow rectangular panels with casually and swiftly painted landscape vignettes. These various scenes from nature and life are in contrast to the florid ground where ornamental blossoms swing on vines issuing broad leaves that terminate in hooked tendrils, all contributing to a lively, restless rhythm grounded only by the symmetrical floral and leaf clumps above and below each of the large oval panels. The neck is decorated with foliage similar to the ground décor but aligned horizontally, while a horizontal band above the foot is more loosely drawn with detached foliate vines. While the figures and accoutrements and much of the floral ground were painted with an outline and wash technique, the landscape elements were produced in a more painterly fashion, the liquidy pigment ranging in color from a pale blue to a deep indigo. The jar is covered inside and out by a bright, clear colorless glaze save for the foot and base that were left unglazed.

The scholars and attendants inhabiting each of the four panels of this handsome jar are subjects close to the hearts of the Chinese, a number of the figures characteristically carrying fans—one would not go out on a late spring or summer day without one—and the fabric-wrapped bundle can only be a qin, a stringed musical instrument favored by the scholarly elite in China. While these images are not difficult to appreciate, some of the references are not as easily accessible. The tall elegant gentleman in the main image here, for example, is being presented with a vase holding three miniature halberds. The word for vase in Chinese, ping, is a homophone for another character pronounced ping, “level,” and the pronunciation in Chinese for three halberds, sanji, is a homophone for another pair of characters, also pronounced sanji, and meaning “three ranks.” The accoutrement therefore conveys a wish that the recipient might advance in rank. In the opposite panel, the ingot-shaped pillow, a type popular among the Chinese, is a wish for wealth, the pillow shaped after a valuable silver ingot.

Despite the esoteric imagery, this type of late Ming underglaze-blue decorated porcelain was popular abroad. Exports abounded decorated with images from Chinese life and lore. For example, a large dish in the historical Topkapi Saray Museum in Istanbul is painted with a scholar and his attendant similar to those here and further with the attendant bearing a vessel with triple halberds (figs. 1-2). The cavetto or inner wall is divided into eight panels, four with floral designs alternating with scenes with paired figures lounging in landscape settings, again similar to those of the present jar (fig. 3). A detail of a bowl, a type commonly exported to Europe during the 17th century, is also a canvas for the halberd presentation scene (fig. 4) and a dish in the Topkapi Saray again is painted with a figure carrying the ubiquitous qin, with the now familiar clouds and mountains providing the setting (fig. 5).

Stylistically the present jar falls between late Ming 17th-century vessels that primarily look to the past and are associated with a Wanli period aesthetic (fig. 6) and those that primarily point to the future and the “transitional” style that crosses the dynastic divide of 1644 (fig. 7). The use of large panels in the main body zone and multiple secondary zones that are often divided into panels as well, along with certain diaper motifs, are features generally associated with late Ming dynasty wares (fig. 6) whereas compositions that sweep around a porcelain body unbroken by panels or sections, along with innovative shapes, point to the future (fig. 7). An unusual and perhaps even diagnostic feature of late Ming 17th-century underglaze-blue decorated porcelain is the fabrication of floral displays and scrolls with blossoms and leaves that are flat and diagrammatic and often unnaturalistically embellished (figs. 6-8). The horror vacui guiding the production of the designs illustrated here, save for the bottle in figure 7, is almost a re-enactment of later14th century porcelain production. During the late Yuan and late Ming periods alike, foreign markets and foreign tastes had great impact on Chinese porcelain production. With new and different stimuli, originating domestically, that penchant for dense compositions dissipated, and hence the bottle of figure 7, which contrasts markedly with the present jar that remains firmly rooted in the Ming. 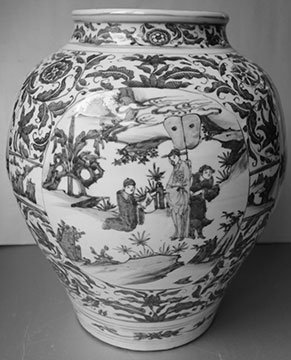 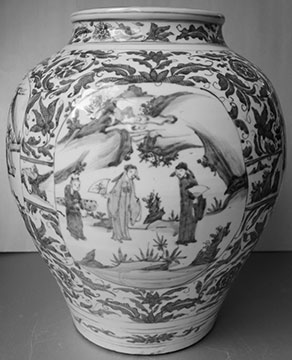 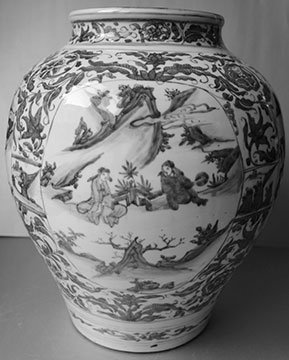 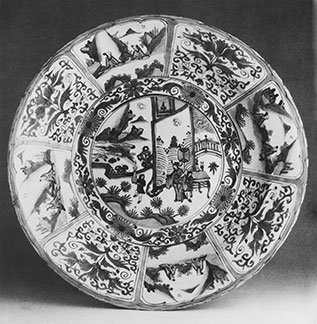 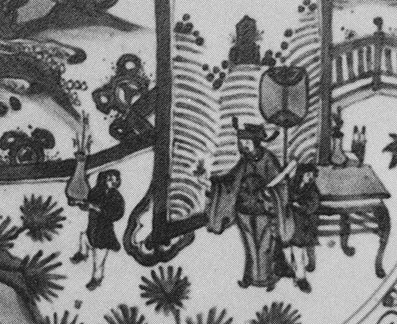 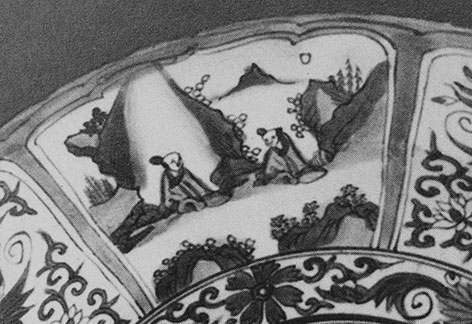 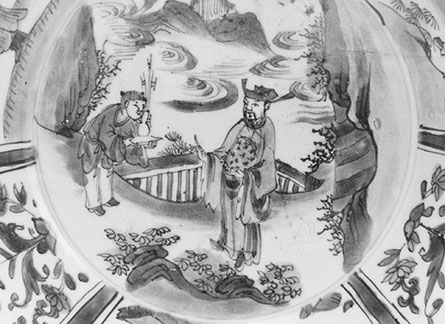 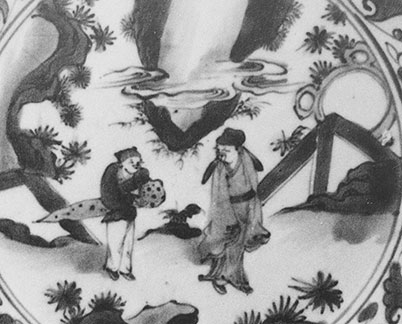 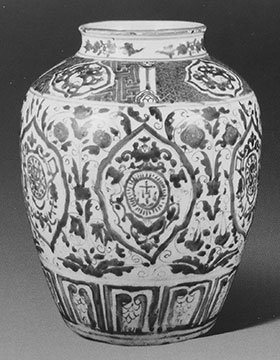 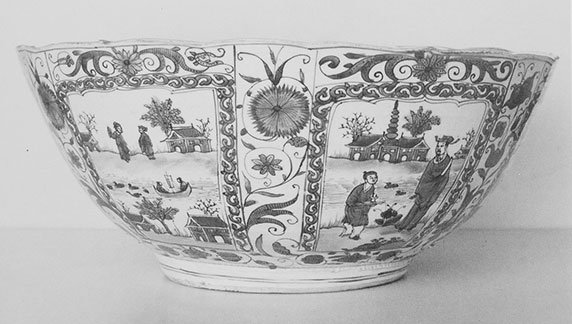