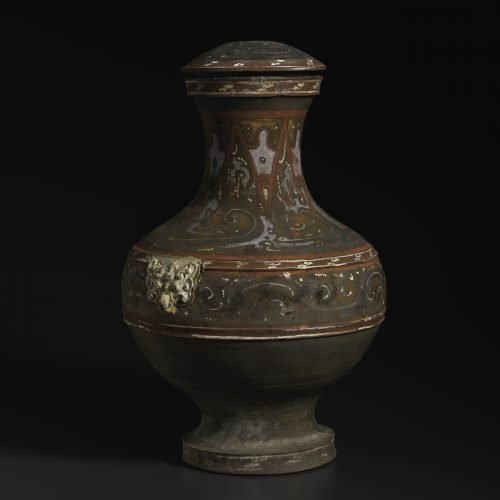 The robust vessel is supported on a high splayed foot, the body ballooning to a full rounded midsection below the incurved neck and banded mouth. The painted decoration in red, ochre, lavender and white is in imitation of lacquer wares, textile and inlaid bronzes. Swirling cloud motifs decorate the mid-body between intricately molded taotie masks applied on opposite sides of the vessel, one of these masks with the original white slip-coating intact, these below triangular blades enclosing large shield-like forms on the neck. The domed cover is painted with four ‘C’ shapes with demi-florets on the rim and the base deeply recessed.

The first great age of ceramic painting in China occurred during the Neolithic period. The second flowered after two-thousand years of dormancy, represented by the Western Han period vessel here. The art of ceramic painting had leaped across two millennia and it would be a stretch to find links between the products of the two periods aside from the use of pigment on a ceramic surface. The migratory nature of style, however, is at work but within a roughly contemporaneous framework. The most common designs found on these early Han products reflect the arrival of lacquer, textiles, and bronze designs and themes at ceramic workshops, while bronze and lacquer shapes had also made the short trek. Ceramic artists of the early Han were thus able to create up-to-date, fashionable styles in a medium less costly than any other, beholden to the migratory nature of style.

The present jar traveled from its birthplace in China, making it to the New World via England and Japan, a migratory path not uncommon in the lives of Chinese ceramics.