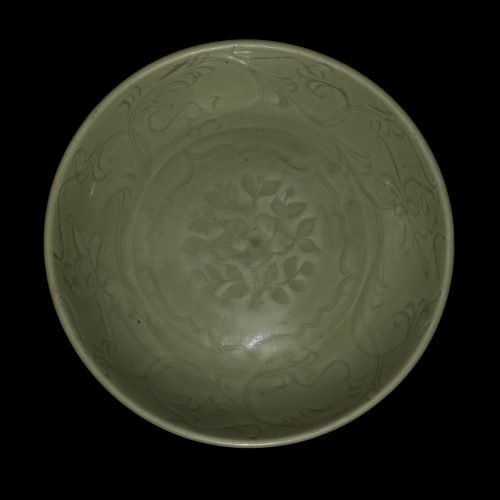 The sturdily potted wide, shallow dish, with rounded sides and a slightly thickened rim, is molded in the domed center with a camellia on a leafy branch within a barbed double line border in the form of a five-pointed ogival medallion. Two swiftly carved floral motifs decorate the well on opposite sides with intertwined leafy sprays spread out between, all beneath a thick, translucent green glaze of even color with slight yellowish tinge that also covers the exterior walls as well as the low rounded foot and wide base, save for an unglazed ring on the base burnt red in the firing. An ink inscription in Arabic in the unglazed ring reads Mirza Sayyed XX Mohammed XX.

The present dish is a result of the successful international business conducted by the producers of ceramics at the Longquan kilns in Zhejiang province during the Yuan-early Ming era. The Middle East was a primary destination for certain styles, especially the large serving dishes to accord with Islamic dining requirements, and of which the present is an example. Individual owners of these imported wares often had their names drilled on the bases of the pieces or, less commonly, written in ink, as in the present example. The majority of these wares it would seem did not remain in private hands but rather went to the Ottoman sultans for their own use within palace walls. The primary conduits for acquiring the ceramics imported from China were wars that provided booty to the victors beginning with the capture of Constantinople in 1453. Pieces were also acquired through taxation on inheritance, gifts and to a much lesser degree through purchase.

The Topkapi Saray Museum in Istanbul, which still today houses numerous Chinese wares imported at that time, the majority underglaze blue decorated porcelains from Jingdezhen, includes celadons belonging to the same family as the present. These similarly shaped platters are decorated with impressed floral blossoms in the interior bottoms or center and freely incised botanical designs in the cavetto. Three saucer-shaped dishes are decorated with similar impressed camellia spays within barbed panels and incised lotus in the wells.1 Like the Topkapi inscriptions, the present one also uses the Arabic alphabet but in the Farsi language. If some of the present inscription is illegible, that too is consistent with many of the Topkapi pieces where inscriptions have been worn away and are indecipherable.