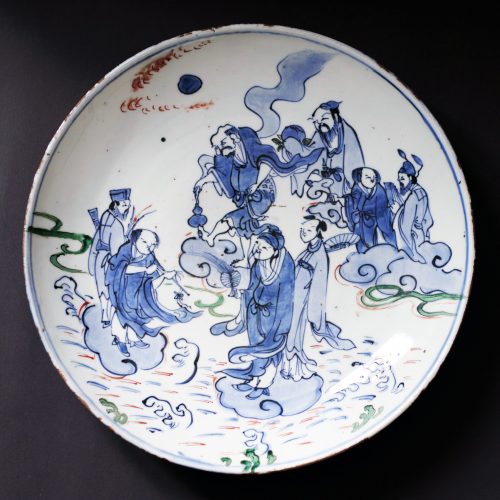 The dish is of shallow form with generously wide, rounded interior decorated with a scene of “Eight Immortals” speeding along by cloud-travel over cresting waves. Zhong Liquan carrying a fan shares a cloud with the female immortal He Xiangu in front. To the left Zhong Guolao with his bamboo tubes and Han Xiangzi with his flute ride on their own cloud while Li Tieguai holding a gourd balances on one foot on his cloud behind. At the far right Cao Guojiu with his characteristic cap plays his castanets and shares his clouds with the hermaphrodite Lan Caihe, a ruyi-shaped leaf in hand, watching and listening intently. The last figure, in the upper right, holds a giant peach, a primary emblem of immortality, an attribute claimed by more than one immortal. The painting is executed in darker and lighter blue washes with cursive outlines in dark blue. Facial details are carefully drawn and the voluminous robes flow lightly in the breeze, the figures floating above waves with red and green highlights, all beneath a moon surrounded by red vapors. The underside is decorated with green enamel grasses with touches of red divided by underglaze-blue songbirds perched on branches. The glaze has chipped off the mouth rim, leaving a tattered appearance, and grit sticks to the foot surrounding the recessed, glazed base.

The dish is part of the category of wares produced at private kilns in Jingdezhen during the late Ming period for export to Japan, where the swiftly painted designs in underglaze blue and technical imperfections were understood by tea people there as signs of naturalness and artlessness, honesty and sincerity. Called kosometsuke, “old blue-decorated” ware, the shapes were suitable for tea-ceremony use, many based on orders from Japan. Such large dishes are rare, the only larger ones are those decorated with extensive landscape scenes, most others falling short of the present by several inches.

The addition of overglaze enamels, wherein the enamel colors dominate the scheme, are known as ko-akae, “old red-decorated” ware. Occasionally, a small bit of color was added to the basic kosometsuke, either underglaze copper red or, as evidenced here, overglaze enamels. While these are still categorized as kosometsuke in the literature and scholarly studies, a former owner of the present dish inscribed the wooden box made for the piece with Tenkei akae sara, “An akae (red-decorated) dish of the Tianqi (period),” Tianqi being the reign period when the bulk of these wares for Japan are believed to have been made, that is between 1621 and 1627. The domestic market for porcelain, including imperial, during the early 17th century had been sorely disrupted by the death throes of the dynasty, affecting all corners of society and the economy. The Jingdezhen bosses turned to customers outside of China to replace the lapse of support at home.

Serving the non-Chinese clientele freed the potters not only from the technical quality expected at home but also from iconographic accuracy. While the presentation of “eight immortals” established the well-known subject in general, the decorators did not find it incumbent upon themselves to depict each figure according to the historic record. While we might expect Zhong Liqian to hold the peach, or even Shou Lao, the stellar deity of immortality who sometimes is shown lording over the eight with peach in hand, here the peach is being held by a figure identified as an immortal simply by virtue of that attribute, the peach gifted by Xi Wangmu, Queen Mother of the West, where the tree of peaches of immortality grows. The privileged owner of this dish would not have been deterred but would have been delighted with the entire package, the features adding up to a stunning representative of what the Japanese of the 17th century expected from China. 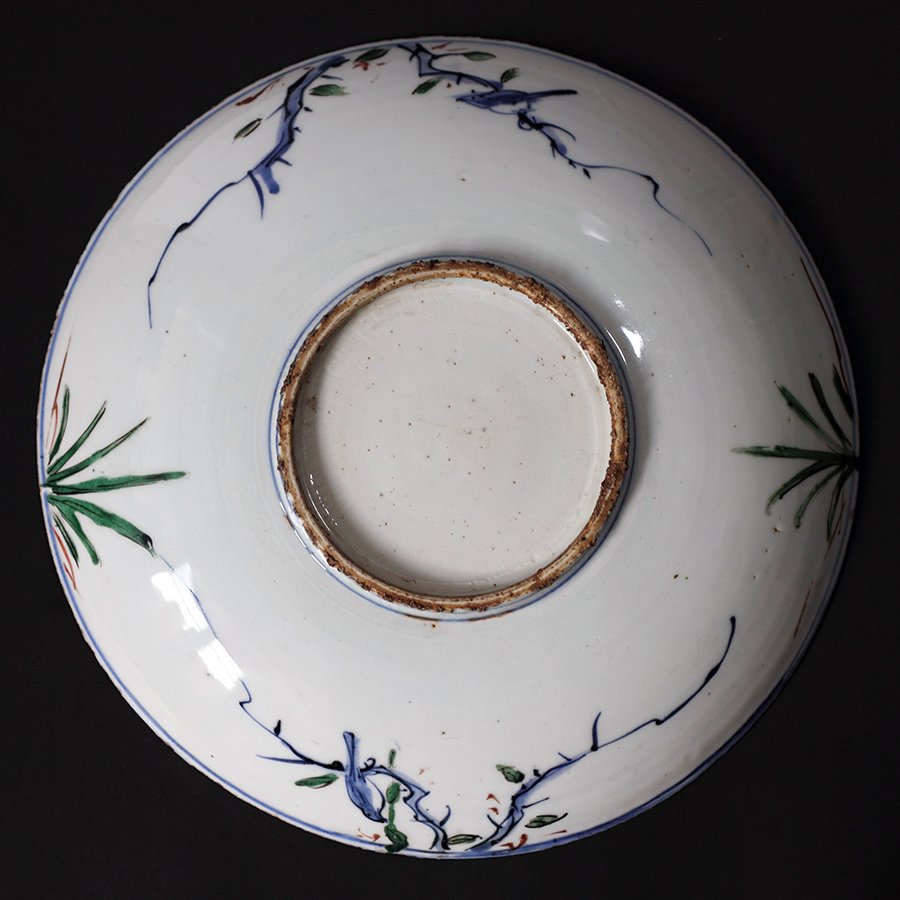