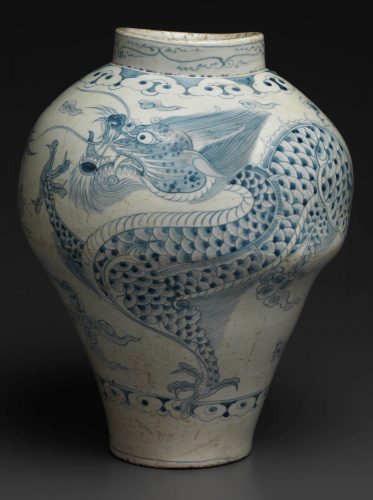 The handsome jar is a robust shape and of substantial size. Rising at a steep angle from the base to the full broad shoulders, the jar swells dramatically above the waist and is surmounted by an upright neck similar in diameter to that of the base, providing a sense of symmetry and balance. The sides are painted in a silvery cobalt with two large striding dragons, each stepping high through the cloud forms with one four-clawed foot extended towards a flaming pearl. The scales of the dragons are carefully drawn and painted in light and dark blue in contrast to the more spirited painting of the faces of the beasts where washes and dots of blue and flowing lineament characterize the tempestuous creatures. A collar of plump ruyi heads encircles the neck below hastily painted ruffled scrolls. Another ruyi band is painted well above the base, which is surrounded by a single blue line, providing a grounding for the main decoration. Kiln sand adheres to the foot which encircles the glazed base marked with irregular crawling. The overall surface of the jar has a satin-like texture and beautiful sheen.

The 15th century was a momentous one in the history of blue-and-white porcelains in China and in Korea. In China it was a period of florescence, of unsurpassed greatness, a time that would forever after be looked back upon as the halcyon days. The mere sound of the names Xuande (1426- 1435) and Chenghua (1464-1487) is enough to take us on a journey to those summits of porcelain production. For Korea, it was a beginning, and an auspicious one. A gift of porcelain blue-and-white to the Korean court from the Xuande emperor was an invitation to follow suit, and that is what the Yi dynasty court did, emulate its great neighbor in the art of porcelain, as it did in government, in philosophy and in literature. As fortune would have it, a source of cobalt, the essential elixir for blue-and-white, was discovered in Korea, also prompting experiments in the use of the mineral. With that material at hand and supplemented greatly with a higher grade of cobalt imported from Mid-Eastern sources via China, the creation of cobalt-decorated porcelain in Korea began its lengthy life.

It is with some confidence that we ascribe Korean blue-and-white in its earliest stage of production in the 15th century by comparison to its late Yuan and early Ming dynasty models, even though we are still unable to say how long that dependent style was in vogue. A second flowering is again attributable in part to historical events, or at least it corresponded temporally with them. At the end of the 16th century, from 1592 to 1598, the powerful warlord Hideyoshi invaded from Japan, plunging the land into chaos, destroying much of Korea’s heritage, and even abducting her potters. The 1636 Manchu invasion from the mainland created further mayhem on the social, political and economic stages. And yet, intersecting with these events was the production of underglaze-blue decorated ware of great elegance, profound grace and quiet beauty. The so-called “autumn grasses” style is characterized by great reserve, unobtrusive decor, a sparing use of cobalt, and a muted blue color likely due the use of local minerals. While this style might have been forced into existence in part because of the scarcity of cobalt, it is considered purely indigenous, one expressive of a native spirit, and one that continues to seduce the world with its special charm.

While this stage is usually dated to the 17th century, we do not know exactly when it began nor when it ceased to be fashionable. There was, however yet a third stage which corresponds to the establishment of official porcelain factories in the early 18th century and it was during this stage that the present dragon jar was made. Its two creatures fling their airborne bodies in wild abandon, stretching their talons over the borders marking their space, the painter responsible for breathing life into these dragons following the unwritten precepts of his trade which allowed a carefree approach, unencumbered by concerns for what is right, predictable, or perfect. The style is well represented by a number of 18th century dragon jars, which, it has been suggested, were made in pairs for ceremonial use by the imperial family and nobility.1 The official kilns continued their production during the 19th century when jars of this type were fitted with much taller necks and the painting slipped into greater wildness and abandon. The dragons here are still able to hold their own as dynamic, exuberant, free-wheeling spirits and as works of art as well.