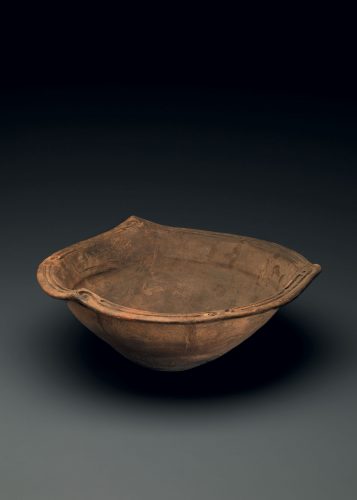 The bowl is heavily built with the walls rising at a wide angle from a flat base to a flared, undulating, tri-peaked rim. Only the top of the thick rim is decorated, the decor consisting of six pairs of deeply grooved double lines each terminating in a hook dividing the rim into six segments, the three peaks rising like cresting waves at points equidistant from each other along the rim. The fabric of the bowl is thick reddish earthenware, relatively smooth on the outside and burnt blackish-grey toward the base while the interior has an irregular surface with an indented ledge below the rim.

A penchant for simplicity, as well as the distinctive mouth rim design described in cat. 38, are found in the large bowl here, a vessel form rarely seen in collections today. The bowl was likely a product of the Chiba area, suggested not only by the unusual features it shares with the previous jar but through comparison with a bowl with its grooved rim rising into four peaks that was discovered in Chiba prefecture (fig. 1). Another bowl of this rare type was illustrated with a group of jars from Nagano prefecture and ascribed to the Middle Jomon period, perhaps representative of an incipient phase of the Late Jomon style under review, one that was emerging and current at the end of the Middle Jomon period (fig. 2).

Jomon, translated literally as “cord marked,” is the generic term used for the early pottery of Japan, a pottery noteworthy for its characteristic designs and methods of decoration produced through the use of cord-wrapped paddles or sticks to beat or impress the clay while still wet and workable. The term also applies to the Neolithic peoples who produced such wares, to their culture in general, and to the period during which the people flourished and the pottery was produced, spanning roughly 10,000 years. The ceramics display both chronological development and regional diversity, as well as intriguing interrelationships between regional styles, the letter expressed in the vessels from Chiba and Nagano illustrated here. 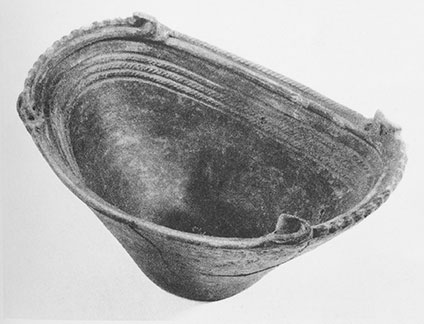 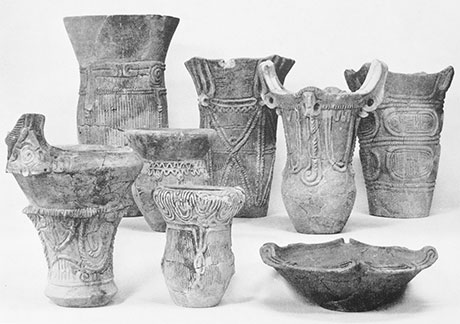