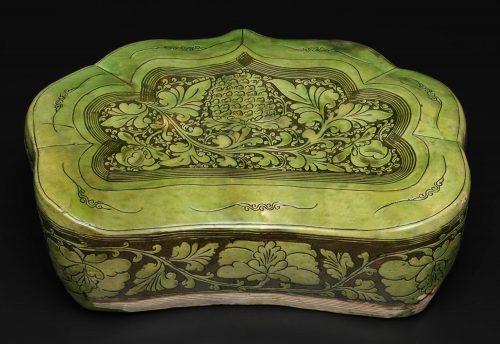 This very grand cloud- or ruyi-shaped pillow is carved in the sgraffiatto technique with a large single “beehive” peony borne on a long leafy stem emerging from one side of the dished headrest. The stem also supports two large buds opening in the lower corners of the frame. The design is detailed by linear incisions and combing and the ground filled with curling fern-like foliage. A combed border encloses the headrest decoration in conforming cloud shape with detached scrolls incised within each lobe, the lobes formed by carved indentations between them which also shape the sides of the pillow. An unbroken peony-laden stem undulating around the sides is carved with eight full blossoms alternating in upright and pendant orientation and separated from each other by plump trefoil leaves in pairs. Combed borders frame the decoration on the sides. The pillow was covered with a green glaze that allows the motifs to stand out in a bright green to olive green against a dark ground that appears blackish-brown on the headrest and deep olive-brown on the sides. The heavy pillow was pierced twice on the back to allow gases to escape during firing. The white slip which provided a ground for the carved, combed, and incised motifs was also casually slathered on the base which was left unglazed and reveals the reddish pottery body of the pillow.

During the Song and Jin dynasties the ruyi-headrest shape was not uncommon (ruyi referring to the trefoil “wish-granting” scepter head form). The two predominant occurrences were pillows in which the headrest was fashioned as a ruyi in slab form supported on a narrower plain base or a sculptural base in the form of an animal or human figure, and, secondly, pillows in which the ruyi form was carried through the pillow in three dimensions as in the present example. Pillows comparable to the present form include both those with simpler linear carving and those with similarly complex and impressive carved and combed decor, a type produced at the Pacun kilns in Yuxian in Henan province.1 Other green- glazed pillows are attributed to the Guantai kilns in Hebei which are also known to have produced extremely high quality green-glazed sgraffiato wares with a boldness in style comparable to the present piece as well as ruyi-formed pillows.2 Given the dark body color of the present pillow, it is, however, likely a product Shanxi province, and easily ranked among its best.