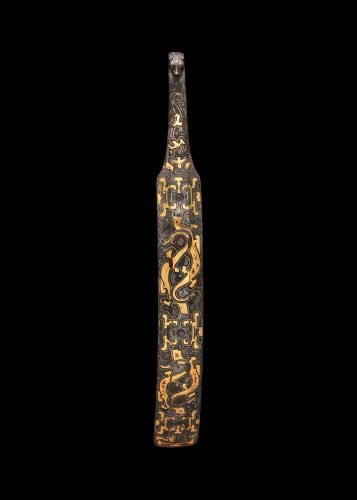 The belthook is large in size, accounting for its impressively heavy weight. It is in the form of a long curved shaft faceted lengthwise in three sections, slightly rounded at one end, curving inward and narrowing at the other where it terminates in a dragon-head hook. Decoration was produced with inlaid gold sheet and silver. The highly abstract design consists of a repeat pattern of addorsed dragons with flattened quatrefoil-shaped heads interspersed with three flattened quadruped forms, the decoration extending onto the neck of the dragon-head terminal. The sides are decorated with very thin silver wire inlaid to form elongated hooks and scrolls. Due to the large size of the garment hook, the reverse has two buttons, each inlaid with silver-wire hooked scrolls. A dark brown patina with small red patches and with areas of deep green is visible on the underside.

In a comprehensive study published in 1966 the great Swedish archaeologist and scholar Bernard Karlgren (1889-1978) identified twenty-two groups and numerous subgroups of belt or garment hooks.1 Karlgren notes that the present type is “known only through a few specimens,” and illustrated the present belthook along side an almost identical example, which he described as “A splendid pair of long and heavy agraffes…..” (fig.1).2 Some years earlier Karlgren wrote about these two “strikingly large and heavy hooks” in detail, describing and diagramming the “intertwined dragons” (fig. 2), the heads of which “are ‘squares with crescents’ playfully embellished and utterly stylized…,” providing a source for the fully abstract “square with crescent” motif found on bronzes.3 Therefore, on the basis of his comprehensive research and experience with such material, Karlgren could conclude that the present belthook and its twin are not only rare pieces but also of some art-historical significance.

An example somewhat shorter in length was published by Jessica Rawson and Emma Bunker who described it as a “lute-shaped garment-hook” (fig. 3). The sinuous golden dragons are more recognizable as such given the beaks and tiny eyes that mark the heads. While not as abstracted as the present, they share an unusual composition, one that is not based on bilateral symmetry, which comes as a surprise since symmetrical decor was most usual in the decoration of belthooks fashioned in this faceted form. In the present hooks under discussion, the inlaid ornament is prompted and determined by the sinuosity of the dragon bodies and subsequent filling of irregular background spaces, all resulting in more mercurial compositions.

Over many centuries the Chinese seemed rarely to have shied away from strong fashion statements. Heavy metal in the Late Zhou seemed to be all the rage of the day, at least in the manner clothing was cinched or secured. Such metal accoutrement was greatly embellished when gold or silver, jade or turquoise, glass or crystal or other semi-precious stones were added to the decorative mix.

Fig. 1: Bronze belthooks with silver and gold inlay, after Bernard Karlgren, “Chinese Agraffes in Two Swedish Collections,“ Bulletin of the Museum of Far Eastern Antiquities, no. 38, Stockholm, 1966, pl. 39 (the present example is in the center). 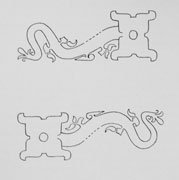 Fig. 2: Diagram of primary dragon motifs on the belthooks in figure 1, after Bernard Karlgren, “Bronzes in the Wessén Collection,” Bulletin of the Museum of Far Eastern Antiquities, no. 30, Stockholm, 1958, p. 192.