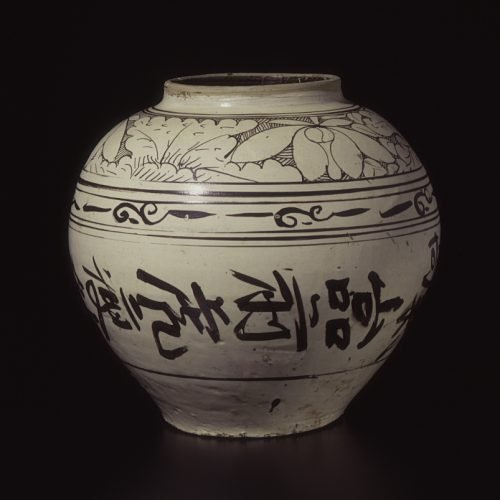 The large, slip-coated stoneware jar, with its handsome globular shape and narrow base, provided the perfect ground for a boldly brushed floral design and powerfully written calligraphy. On the shoulder is a handsome lotus band of three giant blossoms amongst leaves against a ground of swiftly drawn pencil-thin parallel lines. In a wide horizontal band occupying the mid-body zone are the characters yan qian he shou xiong xin zai; jun zi sui pin zhi:

Though the tiger in front of the cliff is emaciated, he has a fierce heart;
although the gentleman is impoverished, he is rich in knowledge.

The calligraphy is executed with a sense of ease and spontaneity that only an individual schooled in calligraphy could have accomplished, and might also have been intended to reach literate clientele who could appreciate not only the sure style but the significance of the inscription as well.

Calligraphy played a more important role in the decoration of Cizhou ware during the early Yuan period than it ever had before, likely the result of a scholarly class which found employment for its skills elsewhere than in the government for which it was schooled.

Excavated shards and jars that provide guidance for possible provenance and that support a Yuan-period date of production include those from Chifeng, Inner Mongolia; from Bacun, Yuxian in Henan; from Guantai, Cizhou in Hebei; and those among the remains excavated at the Yuan capital, Dadu.