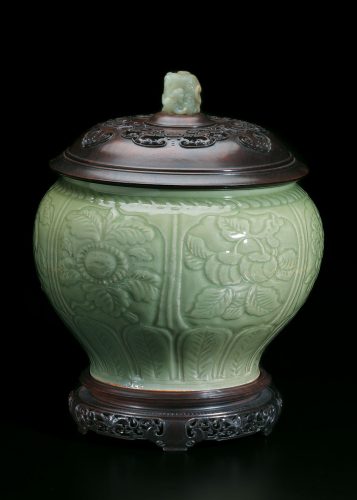 The unusually large and heavily potted jar is a standard guan shape with rounded shoulders, a short neck with rounded mouth, and stands on a sturdy countersunk foot with beveled edge. The deeply recessed base is in the form of a dish that was placed on the inside of the vessel to cover the open base before the upper half of the vessel was luted to the lower half and all parts sealed in place with glaze. The surface is richly ornamented with a predominantly molded design, with carved and incised details. Six ogival panels each frames a branch or stem with fruit, flower, or fungus including a peach, a sunflower, loquats, lingzhi (fungus), lychee and camellia, each leafy stem or branch sprouting from the left lower corner of its panel aside from the lychee which descends from the upper right. Upright plantain leaves with incised spines and veins fill the pointed ogival panels that circle the base forming a fence around the lush garden above. A petal collar with leaves diagonally disposed is carved below the upright rim. The piece is thickly covered by a sea-foam green celadon glaze that contains minuscule bubbles throughout, creating a sense of luminous depth, especially where gathered in the deep recesses of the motifs, while the surface is smooth and relatively bright. The wide foot rim is unglazed revealing the reddish-burnt pale greyish body and the interior is fully glazed save for an irregular area at the center of the inverted dish at the bottom. The rosewood lid is carved in openwork with three foliate motifs embellished with comma curls divided by cut out ruyi forms encircling a raised dome that is inset with a large white jade knob. The jade is of irregular rectangular shape carved with two clambering zhilong dragons, their legs and bifurcated tails emerging from cloud vapors. One zhilong has made it to the top of the handle, his flattened head a subtle beige color.

The Longquan ceramic industry rose to prominence during the Southern Song period (A.D. 1127-1279) when the imperial court resided in Hangzhou in Zhejiang province, becoming a major patron of local kilns. This resulted in the production of celadons, which are ranked among the classics in Chinese ceramic history. Art-historically, the successors of these wares produced at the Longquan kilns slipped into the shadows as a dramatic development occurred elsewhere: the creation and production of underglaze-blue decorated porcelain at Jingdezhen. However, even as Jingdezhen’s newest porcelain product was becoming an immense creative and economic success during the 14th century, as well as the imperial ceramic of choice during much of the 15th century, Longquan celadons continued to sally forth as a desirable and economically viable product at home and abroad.

Moving swiftly away from their comfort zone of serene shapes and thick jade-like glazes with an austere absence of decor, the Longquan potters took up equipment—molds, cutting tools, incising instruments—to create a treasury of motifs and a world of luxurious designs to clothe a veritable army of shapes, many new to their traditional repertory, represented here by the baluster vase from the Percival David Collection now in the British Museum, produced for use in a Buddhist temple with inscribed with a date corresponding to A.D. 1327 (fig. 1).

The dated vase indicates the level of technical achievement reached by the Longquan potters in the earlier 14th century. Part of their genius had to do, however, with flexibility and an open-mind in matters concerning style. We witness shapes and designs these potters must have borrowed from their Jingdezhen counterparts, while some of the current designs might have been the brainchildren of the Longquan potters themselves. It is hard to tell. Given, however, what remains today in collections and museums worldwide from the Yuan and early Ming period, the popularity of the celadons must have been immense and the production commensurate. Large jars, such as the present, figure prominently in this production and include one excavated in Wuhan city in Hubei province, this with large leafy f lower and fruit branches, similar to the present but produced by carving rather than molding, and surmounted by an unglazed lion-form knob, the type which would have inspired the jade on the present vessel’s lid (fig. 2). Another jar with carved lotus peony and lotus design was excavated in Yunnan province (fig. 3), dated to the Yuan in the Chinese source providing the image here, yet elsewhere published as an early Ming period product, based on the claim that it had been retrieved from a tomb datable to A.D. 1426 during the Xuande reign era (A.D. 1426-1435).[1] The importance of the London vase and those from Hubei and Yunnan, among many more examples excavated in China, is that they provide evidence of the relevance of Yuan and early Ming dynasty Longquan ware to the Chinese at home, especially given the belief in the West that later Longquan ware was primarily an export commodity. By the early Ming, this domestic patronage extended even to imperial sponsorship, revealed in historical records; for example, the Hongwu emperor (r. 1368-1398) is known to have ordered these wares in A.D. 1393 and a court- appointed eunuch was still overseeing production of celadons for imperial use in A.D. 1464.[2] Further evidence exists in kiln-site finds, most importantly damaged vessels or shards bearing imperial reign marks of the early Ming period.[3]

The material evincing imperial status was excavated at Dayao, long known to have been one of the most important late Longquan kiln sites, providing evidence through continuous excavations of an extremely impressive production. A recent exhibition at the Oriental Ceramic Museum in Osaka, home of the incomparable Ataka collection, allowed us to contemplate within the environs of a serene Japanese setting these great celadon treasures, quite appropriately since the Japanese remained the strongest advocates and clients of Longquan wares long after Jingdezhen underglaze-blue decorated porcelain ha d mesmerized the rest of the world. Large Longquan celadon guan jars were found among the sea- bottom remains off the Sinan coast of Korea of a Chinese cargo ship destined for Japan in the early 14th century A.D. and Buddhist temple collections and archaeological finds at important cultural sites of this period in Japan also include such jars.

The excavated Dayao material would point to a Ming-dynasty period of production for the present piece. One interesting detail occurring on this jar is the treatment of the interior of the plantain leaves surrounding the base, an unusual motif found also on the neck of what remains of a baluster vase at Dayao (fig. 4). It would appear that the present piece was a precursor to that that mid-Ming period example.

As suggested above, a mainstay of the Longquan kilns was the export market, and in addition to Japan, the Middle East and Southeast Asia provided very important customers for the ware. A jar that is a somewhat smaller example than the present was many years ago published as being in a private collection in Singapore where it was being exhibited (fig. 5). The composition is like the present with upright plantain leaves surrounding ogival panels containing large botanical motifs, and the piece is decorated with a similar design around neck. That the jar had been imported during the Ming period is not unlikely. The large Chinese community in Southeast Asia would have provided enthusiastic recipients for such a piece, as it might have for the present jar which was, in fact, acquired in Singapore in recent times. It was there that the piece would have been fitted with the exquisite jade-capped wooden lid and openwork wooden base, transforming this superb example of the early Ming Longquan potter’s craft into a magnificent one. 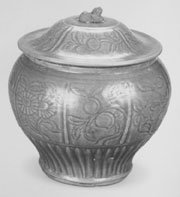 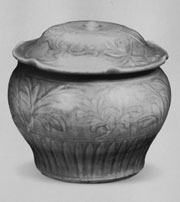 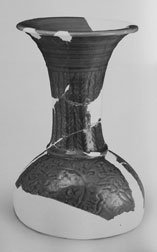 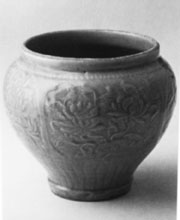