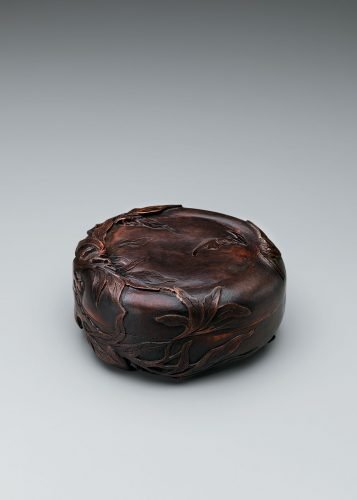 The large circular node is very light in weight and carved with the auspicious bat and peach motif. The leaves and branches extend halfway around the sides and cling onto the top and bottom with one plump peach carved on the cover opposite three bats in flight. Two additional bats were carved on the underside to comprise the symbolic wufu, “five bats.” The natural shape of the bamboo has a circular depression on the top and the base, which are smooth and surrounded by the pebbled bamboo skin. The mahogany-colored material is burnished to lighter amber tones on the bark of the peach branch and around the midsection of the box rim.

Bamboo was one of the primary materials used for the creation of brush and scroll pots used by Chinese calligraphers and painters. Various other containers and objects, including toggles, armrests, brush handles, cylindrical incense holders, vessels imitating rhinoceros-horn cups, and sculptures portraying Daoist immortals and Buddhist figures, were fashioned from bamboo stalks and roots. Small covered containers such as the present box are relatively rare, but not unknown. A box of oblong form is intricately worked with a pine- grove and figure on top and with pine branches and needles covering the exterior walls (fig. 1). A quite naturalistic flavor and texture is captured in the carving of a smaller box, about half the size of the present, from a bamboo root, again with pine branches spread over the box (fig. 2). The shape of a bamboo box with peach tree decor in the Seattle Art Museum is actually carved in the form of a peach, rather than the circular design of the present.1

In carving the present box the craftsman was able to utilize the thicker perimeter of the node to produce the majority of the design, and especially the peaches, in high relief. The box is characterized by a feeling of naturalism achieved by the carver who allowed the thick trunk of the peach tree to grow uninterrupted across the two sections of the box and who further provided an easy spacing of the elements of the composition that had to reflect the grounded and the airborne simultaneously. He sensitively carved the images in multiple layers, completing his task with great success.

The attractiveness of the box is enhanced by its symbolic value. In Chinese the words for bat and happiness are homonyms. Therefore the words wufu, “five bats,” or their images could denote the Five Happinesses: health, wealth, long life, good fortune, and tranquility. The bats are usually arranged symbolically in Chinese decorative arts around the character shou, “longevity.” Here the peach tree and its fruit, referring to the giant tree growing in the garden of Xiwangmu, legendary Queen Mother of the West, symbolize immortality. Her tree bore fruit once in every three millennia, but those magical fruits brought immortality to any who consumed them. One can only wonder what might have been kept in the present box to also aid in attaining, if not immortality, at least some degree of happiness and tranquility.