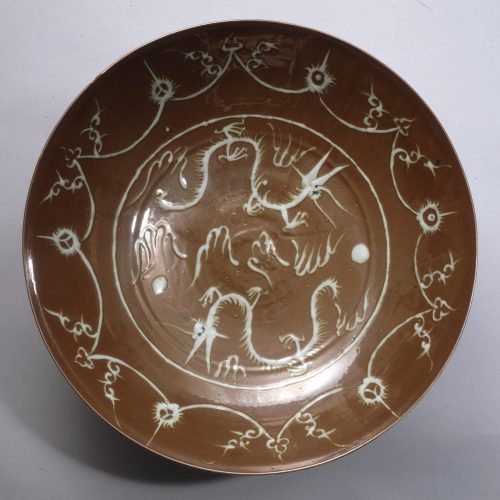 The deep dish is quite thinly potted for such a monumental piece, the sides widely rounded, the horizontal grooves produced by the potter’s fingers while turning the vessel on a wheel still evident on the exterior. The dish is covered with a coffee-color glaze that resembles lusterware in sheen, the gleaming surface due to a layer of clear, colorless glaze over the brown. Decorated with a thick white slip, the central medallion is painted with two spiny dragons with eyes highlighted in black, each dragon like a deep-sea creature writhing through waves as they confront each other in the midst of pearls and wisps of foam. The well is decorated with a swag design of alternating flaming pearls and tridents flanked by swiftly painted vine scrolls. A reddish-brown coating on the base is densely covered in wide areas by a coarse sandy grit. Two characters are written in black ink on the base, one corresponding to the number seven, the other illegible. The narrow rim of the incurved foot is unglazed and charcoal grey in color although the body of the piece would be the off-white normally seen in Swatow wares.

The decoration was achieved in a multi-stepped operation: an initial application of slip, followed by glaze, followed by the white-slip design and lastly by a final coat of glaze. Characteristically, the base does not reflect the care expended in glazing and decorating such ceramics. Likely their agenda, destined for export, precluded attention to such details.

The kilns that produced what have long been called Swatow wares in the west (named after Shantou in Guangdong from where the ceramics were believed to have been exported) were actually discovered in Zhangzhou prefecture in neighboring Fujian province. Since that discovery, it has become more accurate to refer to these wares as Zhangzhou wares. Likely produced exclusively as an export commodity, the most exuberantly and swiftly decorated among them were underglaze-blue and overglaze enameled wares, whereas a range of slip-decorated wares, represented by the dish here, were far more carefully made and aesthetically subtle. The greatest collections of Zhangzhou wares have been amassed in Japan, Southeast Asia, and the Islamic world, the primary destinations of the wares during the late Ming era.[1]

1. For almost identical examples, see one excavated in South Sulawesi in a private collection and another in the Museum Keramik, Jakarta from the Adam Malik Collection, both published by Sumarah Adhyatman in Zhangzhou (Swatow) Ceramics: Sixteenth to Seventeenth Cienturies Found in Indonesia, Jakarta, 1999, nos. 247 and 248, and six in the Topkapi Saray Museum, Istanbul, one illustrated by Regina Krahl in Chinese Ceramics in the Topkapi Saray Museum, Istanbul, vol. II: Yuan and Ming Dynasty Porcelains, London, 1986, fig. 1941, p. 896.