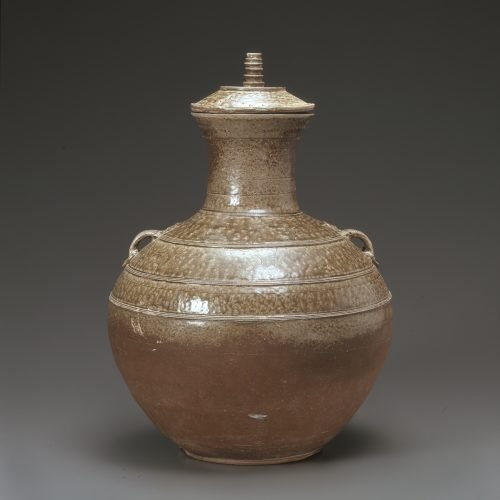 Exhibited and published: Chūgoku no Tōji (“Chinese Ceramics”), catalogue for the Special Exhibition of Chinese Ceramics at the Tokyo National Museum, Tokyo, 1994, no. 32, color plate, p. 28.

The robust globular body is surmounted by a tall cylindrical neck flaring to the mouth where the saucer-shaped lid with a tall tiered knob snugly rests. Three grooved bands encircle the upper body to form three zones, the upper two decorated with lightly incised, gracefully postured long-tailed birds, the lower zone with hatching over combed waves. The shoulder is applied with loop handles issuing from crisp taotie-mask appliqués with mock ring handles applied below. A thin, mottled khaki to olive-brown coloured ash-fluxed glaze covers the upper half of the vessel like a skin, the unglazed lower portion of the ware, transitional in hardness and permeability between earthenware and stoneware, burnt reddish brown in the firing.

It is easy to understand the taotie-mask “handles” as motifs transferred from bronze work to that of the potter. However, there are no precedents in traditional Chinese bronzes, ceramics, lacquers or jades for the unusual lid on the present vessel. Rather, a migration from beyond China’s borders is the only way to explain the form of the unusual finial. The distinctive spires surmounting the stupa—or monumental reliquaries– of the Indian Buddhist world could well have provided models (figs. 1-2). Wu Hung notes that “The second and first centuries B.C. were a transitional period during which the Chinese may have heard about Buddhism and become aware of certain western religious art and architectural forms….” and further that images of the stupa and the Buddha were incorporated into the designs of a 1st-century imperial mausolea in China itself.1 It is thus clear that the ceramic finial here could have been a result of Indian Buddhist influence, a migration of monumental import as subsequent Chinese history and art history demonstrates. 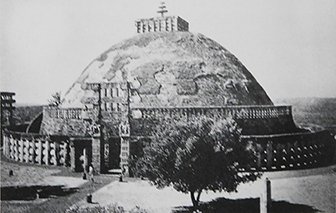 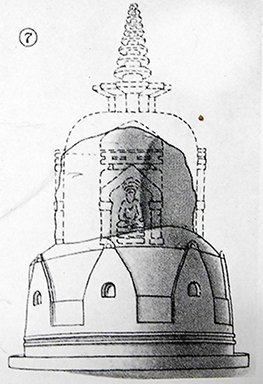