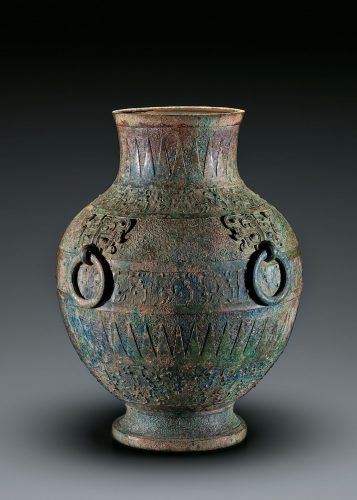 The robust ovoid body rests on a high splayed foot with cylindrical rim surrounding the deeply recessed base, the rounded shoulders curving to a neck that gently flares to the splayed lip. Including the foot the vessel is cast with seven bands of decoration, four with an identical intaglio relief design alternating with three registers each comprised of a high-relief pattern distinct from the intaglio pattern but identical to each other, the decorated zones bordered by and separated from each other by narrow undecorated flat-relief belts circling the vessel. The intaglio design is a repeat pattern comprised of rectilinear shapes infilled with slanted ‘eyes’ enclosed by curlicues and hooks on a delicate leiwen ground. A row of ascendant, sharply pointed, triangular blades in flat relief is set against the patterned ground in the wide neckband zone while a similar row of upright triangles is silhouetted against the same ground in the register just below the waist. Four taotie masks in relief, dangling ring handles, are set against the same pattern in the band above the waist and the splayed section of the foot is decorated with the same intaglio design without interruption. The three registers alternating with these are comprised of very finely cast, intricately designed patterns of overlapping feathered wings and raised bosses enclosed by granulated dots and striations. An unusual feature of this vessel is the group of four masks and handles incorporated into the composition in place of the usual single pair. Each taotie mask is set high on the shoulder with raised eyes enclosed by furred and dotted scrolling brows, horns and fangs. The loose rings are suspended from loops and decorated with ‘S’ scrolls on diagonal striated grounds. The surface of the vessel is encrusted with a patina ranging in color from malachite green to azurite blue.

The present hu represents a vivacious ornamental style that developed in the design of bronzes during the course of the Eastern Zhou period (770-221 B.C.). In precedent Bronze Age vessels, motifs, designs and decorative programs were held to embody or concretize theological precepts or beliefs and to reflect social and political realities. By the late Zhou, however, the importance and function of bronze vessels dramatically changed. They sloughed off the ties that bound their predecessors to the blessed ancestors and to the mysterious forces that ordered existence and being. Images that had previously been imbued with meaning lost that significance as they dissolved into patterns that could make a bronze surface appear encrusted with otherworldly jewels, and it was not long before semi-precious gems were indeed laid into the designs. The new raison d’être for bronzes was their decorative beauty and a primary function was to serve as symbols of wealth and social status. Their production was a vast undertaking, the results of which could be quite exhilarating.

A crazy quilt of bronze styles was pieced together as various regions throughout China decided—to put it in the most simplistic of terms— what patterns and designs, what shapes, what appendages, what sizes and numbers suited them best. The interrelation between the consequent styles and the marketing of wares beyond the home turf of the bronze foundries increased the complexity of this history and production. For example, the discovery and excavation of the 6th-5th century B.C. bronze foundry in modern Houma in Shanxi province revealed an extraordinary wealth of material, including thousands of fragments of intricately decorated clay moulds that were used in the production of bronze vessels, objects, bells, and mirrors.[1] The variety of designs is spectacular and, based on comparison with these finds, Chinese scholars have suggested and demonstrated that bronzes produced at Houma, capital of the powerful state of Jin during the late Zhou period, had wide distribution in China, for example into Henan and Anhui provinces. Also, importantly, the ‘Liyu style’—a designation based on the style of bronzes emanating from the Liyu area in Shanxi around five-hundred kilometers north of Houma— is believed to have been a product of the Houma foundry.[2]

The present bronze can be understood as a product of this foundry or, at least, a center of manufacture within its sphere of influence, based on its various characteristics: the types of motifs and filler patterns that appear on the bronze, the intricacy of the inter weaving, interlacing, and detailing to produce the immensely complex overall patterns, the replication of those patterns across a surface, the specific character of the two distinctive relief styles through which those motifs and patterns are given form, the attention to each detail including the ornamental taotie masks supporting the ring handles, as well as the decor on the handles themselves, and finally the crispness of casting. Appreciating the similarity between details of the surface design of the present vessel with other likely Houma products, such as a hu from Taiyuan in Shanxi province, is made almost impossible because of the overwhelming nature of extravagant appendages and dramatic profiles (fig. 1). However, the more sober form and demeanor of the present vessel are quite similar to other bronzes also attributed to Houma, such as a hu in the British Museum, with its more classic form (fig. 2), and to a hu attributable to the early 5th century B.C. in the Shanghai Museum (fig. 3). 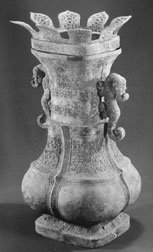 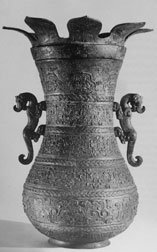 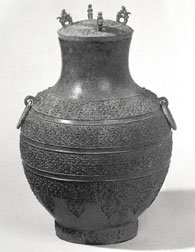