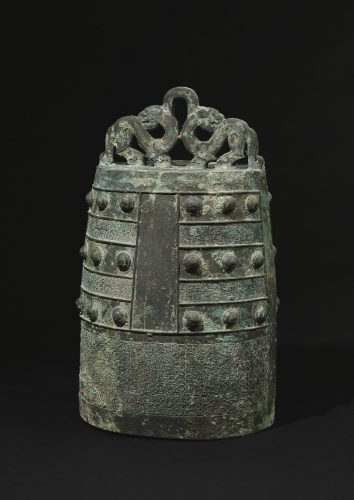 Of pointed oval section, the heavily cast elliptical bell has slightly tapering sides and a flat top surmounted by a suspension loop issuing from the heads of a pair of adorsed dragons. The snarling pair, with heads twisted back forming an S-curve with their scaled bodies, have long furred tails falling to the ground to provide balance for their upraised torsos. The top of the bell is intricately cast with squared, interlocking zoomorphs with circlet eyes in thread relief. This pattern is repeated in a wide band on each side of the bell and in between rows of eighteen raised bosses, each cast with an upturned taotie mask. The bosses are enclosed in six horizontal panels within a raised border grid, a plain vertical panel in the center. Overall the surface is dark gray with patinated areas that are light green and turquoise in color.

The bell’s three main decorative features—the intaglio surface design, the form of the suspension device, and the bosses are comparable or related to late Zhou dynasty bronze vessels and bells of the 6th-early 5th century B.C. Its provenance is suggested by archaeological discoveries in Shanxi where the Houma bronze foundry yielded models and molds that correspond with the decoration on the present bell.

Ritual and music were linked in the mind of Confucius (551-479 B.C.) and his successors who maintained that the proper practice of ritual and music would lead society to a life of morality, sincerity, loyalty and justice.2 The present bell, a part of the great musical tradition, could well have been made during the lifetime of the great philosopher/sage himself. In Chinese society not only did Confucianism run parallel to Daoism and Buddhism in general, but also an individual could embrace all three of these “religions” simultaneously, adhering to one or the other more prominently and actively as his or her life necessitated.

2. See Jenny So, ed., Music in the Age of Confucius, Washington D.C., 2000, p. 121 and http://www.academia.edu/1929545/The_Philosophy_of_Music_and_Ritual_in_Pre-Han_Confucian_Thought_Exalting_the_Power_of_Music_in_Human_Life