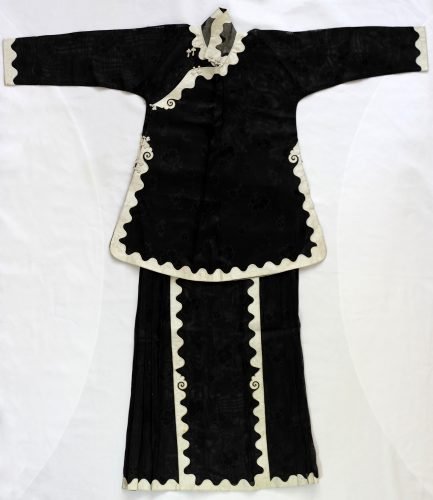 Formerly in the Linda Wrigglesworth collection

The black silk damask gauze of the jacket and skirt is transparent, patterned with various scattered floral motifs, trimmed with white-satin scalloped borders and secured with small double-frog closures. In the twilight of the Qing dynasty clothing for the upper classes in China was stylish, refined and superbly made, such as the present ensemble, mirroring the Imperial Household’s wardrobe. This jacket and matching skirt are in very fine condition and represent Shanghai high style in the early 20th century. John Vollmer in a recent discussion noted that the present outfit is the Chinese version of Coco Chanel’s “little black dress.”