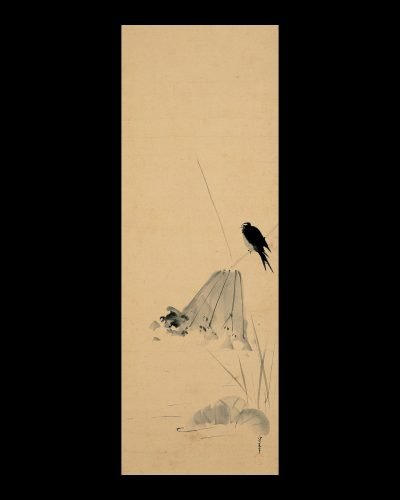 Artist’s seal: Morikage (carved in the shape of an eggplant)

A swallow with characteristic forked tail perches on the stalk of a lotus plant, which emerges from water that is defined by further leaves rising from ripples. Although the subject matter is restricted and pictorial elements few, the painting is yet rich in visual complexity. Organized around the diagonal axes of the picture, the composition contrasts light against dark, wet against dry, and abstract against more detailed areas. The technique is akin to that of the haboku landscape paintings of Japan which feature spontaneous application of ink wash.

Kusumi Morikage was born in Kaga but lived mostly in Kyoto. His dates of birth and death are not recorded in standard biographical sources but one of his paintings was inscribed by Kogetsu Sogen in 1635 and another by the tea-master Fujimura Yoken in 1697, indicating his approximate period of activity. By 1641 he was an important disciple of Kano Tan’yu (1602-74), marrying the daughter of one of Tan’yu’s best pupils. The couple had two children whose scandalous behavior resulted in Morikage eventually leaving Tan’yu’s studio, although some explain the departure as Morikage’s gradual estrangement from the Kano style practiced there. It is said that Morikage absented himself to Kaga for six years, although there is no record that he served as an official painter despite his great fame, and he then moved to Kyoto, where he was associated with the famous tea-master Fujimura Yoken, who, as noted above, inscribed one of Morikage’s paintings in 1697, presumably when the master was still alive.