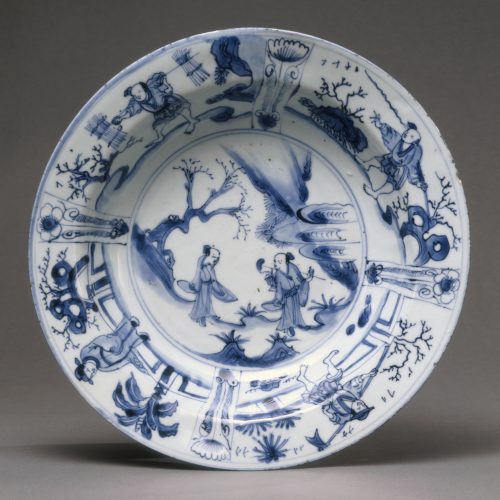 The deep dish with rounded cavetto and wide flat upturned mouth rim is thin-walled, light in weight, and supported on a low, narrow, v-shaped footring slanted inwards, surrounding a slightly recessed base. The fluent, smoothly brushed cobalt pigment fired to a bright blue in lighter and darker tones on the bright white porcelain beneath a smooth, colorless glaze with gleaming surface that exhibits spit outs especially on the base where kiln grit adheres in a small area and more generally to the foot ring. The decoration, combining pencil-like lineament with slick washes of pigment, focusses on the human figure: in the central area on the interior of the dish a pair of scholars in long robes, one with a flower basket hanging from a staff over his shoulder, stroll together in conversation beneath a tree spare of leaves and dramatic scarp with its face in blue pigment contrasting with the white of the porcelain. Four massive panels occupy the cavetto up to the mouth rim each dominated by a large figure: a farmer with hoe, an angler with his fishing rod, a wood gatherer with bundles on each side of a pole across his shoulders, and a scholar standing contemplatively in the last. Garden balustrades, idiosyncratic earthy outcroppings, and sparingly brushed bare trees, palms, pine and bamboo complete the scenes. The narrow panels between contain stylized tulips and petalled flowers. Four large medallion-like compositions consisting of what are thought to be Dutch and Isnik flowers decorate the exterior.

This most engaging subject and composition was quite fashionable towards the end of the Ming, as evinced by a good number of examples, often with the medallion design here on the exterior, worked into the cavetto panel format on the interior. These are generally ascribed to to the Chongzhen period (1627-1644). Representations of tulips resulted from the fascination with that flower from the 1630s in the Netherlands. And the dramatic cliff, with a flash of white against brilliant blue almost like a blade slicing through the composition became a tell-tale sign of transitional wares, providing suitable stage and theatre for subjects often literary or historical. 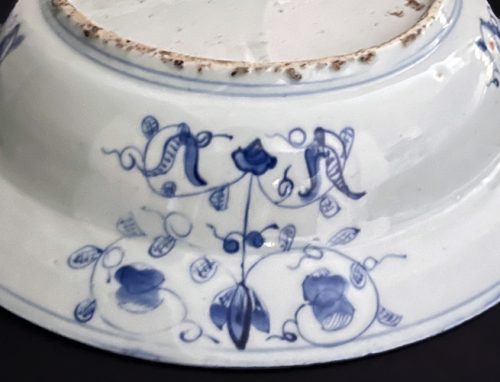