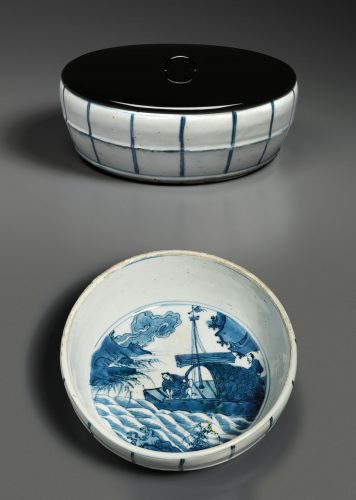 The heavy basin is potted with thick curved sides rising from an irregular foot surrounding a slightly recessed flat base. Fifteen underglaze-blue painted vertical lines on the exterior represent the staves of a wooden barrel and a raised horizontal ridge at the waist and another at the foot, both lightly brushed in blue, represent the belts securing the staves. The vessel’s circular interior provides an ample ground for a waterscape scene painted in inky cobalt blue. The boatman has let the sail down and peers into the roiling water, depicted as stylized, overlapping waves rolling by and crashing on the rocks in the foreground. A bearded figure stands aft behind the woven-mat roof of the cabin with a rocky outcropping looming above. Spits of land with blowing marsh grasses are on the left with a stylized thundercloud hovering in the distance. The blue varies in intensity from thin and pale to dark and inky and the blue appropriately brushed for each element: fine to thick lines, jabs of the brush, heaping and piling, and fluid washes. The rough, raw porcelain with pinholes and iron spots can be seen on the unglazed base while the glaze also exhibits iron spitouts along with flaking at the mouth rim. The contemporary black lacquer cover has a thin upright loop handle.

Among the kosometsuke vessels made to hold fresh water for the tea ceremony, called mizusashi in Japan, certain shapes are repeatedly seen and thus not surprising to come upon. While the present shape is not unknown in the world of Japanese tea, the few examples that have been published, or seen in Japan by the present writer, are much smaller in size than the present and were used in food service (figs. 1-3). Not so with the present vessel. The Japanese label on the box and the small wooden tag attached to the box refer to the piece as a sometsuke batarai hachi, a blue-decorated wooden manger or basin for a horse, suggesting a large, rustic vessel.1 The shape has precedents in Chinese ceramics produced in celadon at the Longquan kilns (fig. 4) and also at yingqing-producing center s in Jiangxi and Fujian (fig. 5). The Chinese today call the shapes “sugarcane sections,” referring to bundles of cane and thus an origin also close to the earth.

A mizusashi with similar blue-painted staves and a girdle situated to brace the handle is further embellished with decorative designs on each stave (fig. 6). This is among the most impressive of kosometsuke wares—bold and stirring, greeting one immediately with the full force of its presence. The mizusashi here, on the other hand, has secrets, hidden pleasures that are there for the taking only when the black-lacquer lid is removed and the interior revealed. What a perfect tea ceremony event; what a perfect tea ceremony conceit.

Underglaze-blue decorated porcelains from China in inventive and eccentric styles were commissioned, sought after, and cherished by tea men in Japan, where the wares made specifically for their use and gratification were known as kosometsuke, “old blue-decorated style,” wares. Understanding the origin of kosometuske style takes one deep into a fascinating world of interrelationships between the Japanese world of tea and traditional Chinese culture, where despite over whelming differences in values, tastes and perceptions, a ceramic style could be forged that was a strong and special link between the two. The knowledge of Chinese myth, legend and history in Japan meant that subjects drawn from those sources for the decoration of their tea wares would be understood and appreciated. The present scene, for example, might be any boatman, any boat or any passenger, or there might be a more specific subject intended. The illustrations from the popular Ming-dynasty novel Shuihuzhuan, “The Water Margin,” with the adventures of its 108 heroes abounding, provided a rich source from which ceramic decorators could draw. The present image might have been suggested by such a source (fig. 7).2

1. Kawasaki Hiroshi confirmed the reading of the tag and read two of the characters on the defaced label on the lid of the box as “Nankin,” or Nanjing. Nanjing was once believed in Japan to be the source of the late Ming porcelains from China and especially those with enamelled decoration. The name stuck long after more accurate information was known.

2. Julia B. Curtis in her Chinese Porcelain of the Seventeen Century: Landscapes, Scholars’ Motifs, and Narratives, New York, 1995, throws much light on this fascinating world and while the present writer suggesting a link between our mizusashi design and the popular novel might also be exhibiting a stretch of the imagination, that’s what kosometsuke is about! 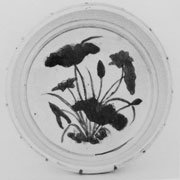 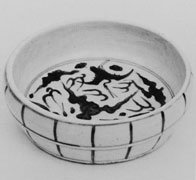 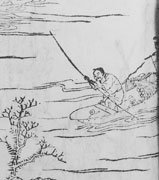 Fig. 7: Detail from a woodblock-printed scene from Shuihuzhuan, after Julia B. Curtis, Chinese Porcelain of the Seventeen Century: Landscapes, Scholars’ Motifs, and Narratives, New York, 1995, p. 139.