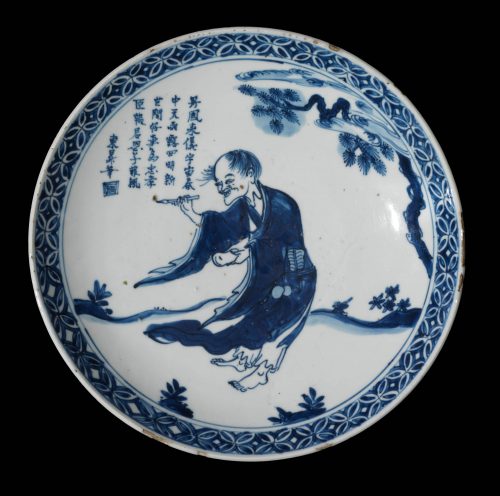 Kosometsuke Dish with an Image of Hanshan (Kanzan)

The dish is well potted with gently rounded sides rising to a wide rim creating an open ground for the interior scene. Painted in intense cobalt beneath a clear bright glaze is an image of the eccentric Chan monk-poet Hanshan. Wearing a long deep-blue robe over raggedy trousers, a gourd hanging from and fan tucked in his belt, the figure looks as though he is about to be swept off his feet by the wind. His signature wispy hair frames his wizened, boney face caught in a bemused expression. The poet holds a brush in one hand, a palette or inkstone in the other, and is postured as though he has just completed the four-line poem to the left. A windswept pine and swirling clouds are freely painted to the right, the tree bending over the sparsely foliaged ground. The rim is painted with a floret diaper pattern in white reserve detailed against an intense blue. Trailing ruyi forms are freely brushed on the underside. The foot surrounding the glazed base is itself covered with kiln grit while glaze has chipped from the lip rim leaving areas of the porcelain exposed.

Recipients of Chinese export wares in Europe and the Middle East would have seen the figural or narrative scenes on blue-and-white porcelains as attractive and lively decoration and also as intriguing exoticisms from the Far East. To the Japanese, however, who also comprised an extremely important market for Chinese porcelains in the late Ming, and especially for the type made specifically for them under consideration here, such imagery would have been legible and meaningful, well-versed as the Japanese were in Chinese history, legend, and the Buddhist religious beliefs that had become their own. The underglaze-blue decorated wares were known in Japan as kosometsuke, “old blue-decorated” ware, a term used worldwide today to designate this most unconventional Chinese porcelain style.1

The unkempt figure, the windswept hair and ragged attire, a brush in hand as he scrutinizes the poetic inscription brushed above, is an image of the Tang-dynasty eccentric monk-poet Hanshan, known as Kanzan in Japan. He and his equally eccentric and reclusive friend Shide, known in Japan as Jittoku, are among the icons of Chan (Zen in Japan) Buddhist lore. In the present piece we see Hanshan alone in the wilderness smiling and laughing as this jokester-wise man was wont to do. The fan and gourd are usually associated with Daoist characters and this mad savant is known to have had Daoist inclinations as well. In Japan, where Zen was ferverently practiced, painted images of Hanshan (Kanzan) and Shide (Jittoku) by Chinese and Japanese artists alike abound. Given the association of Zen precepts with tea-drinking practices and culture in Japan, it is natural that Zen Buddhist subjects would be found appropriate for utensils used at tea gatherings. Zen subjects thus appear on the export porcelains made specifically for the Japanese during the late Ming period.

A kosometsuke dish in the British Museum is inscribed with the same poem as the present dish, the poem enclosed in one of the three fans that decorate the dish, romanized and translated by Jessica Harrison-Hall

“The red phoenix approaches according to the rites and spring starts in the universe
Wet dew from the middle of the sky is formed and the four seasons are refreshed
The good things in the world are loyalty and filiality
Servants should honour their masters’ kindness and offspring should honour their parents’ kindness.”1

The Confucian precepts emphasized in the verse–loyalty and filial piety–have little to do with the essence of Hanshan. Poems attributed to Hanshan have been translated into English by such notable scholars as Arthur Waley and Burton Watson, and by the American poet Gary Snyder. Hanshan’s verses convey not only Chan Buddhist wisdom and wit, but laments on poverty, on the avariciousness of the Confucian bureaucracy and even the stupidity of the Buddhist clergy and Daoist practitioners, along with compelling musings on nature and his own rugged Cold Mountain (“Hanshan”) home in the Tiantai range of mountains. One then would easily conclude that the Hanshan on this dish did not pen the poem we see next to him but is rather viewing it with some skepticism. Yet the Confucian wisdom and sentiments therein would nevertheless have been understandable not only in China but also, importantly, in Japan. The image on the present dish might well be interpreted as a marriage of the three doctrines: Buddhism in the figure of the monk, Daoism in his gourd and fan attributes, and Confucianism in the content of the poem. Perhaps this is reading too much into the decoration, but when one observes the intensity and depth with which Japanese view their ceramics, it might not be such an overreach after all.