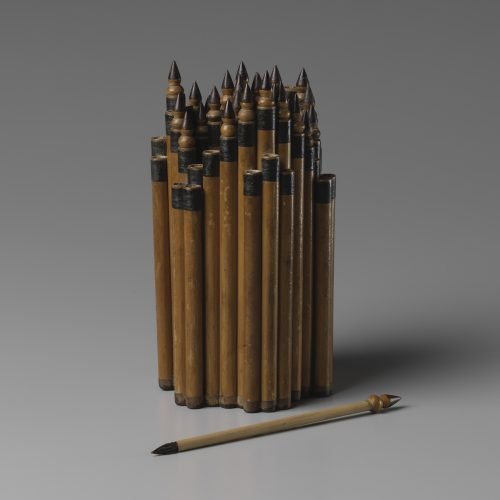 In contrast to the simple, straightforward, even “naturalistic” Chinese jichimu brushpot (no. 32) is an unusual multi-tubed vessel produced by Korean craftsmen. The remarkable container was fashioned to hold multiple brushes and differs from conventional brushpots in that each brush would be held safely in its own sheath and furthermore placed with the tip down. The brushpot was constructed with thirty-nine bamboo tubes inside and around a short, cylindrical metal cup at the center, which is masked by the stalks surrounding it. A number of these tubes was attached in a “peace-sign” or “Y”-shaped pattern inside the cup, with the remainder of the stalks abutting each other in two rows around the periphery, with shorter reeds attached on the outside of the circle. The tubes are made to resemble brush handles each terminating at the top in a black binding and each covered in a clear lacquer coating. The base of the brushpot is a flat piece of wood conforming to the shape formed by the arrangement of tubes or reeds. The brushes that are still intact have bamboo handles, animal-hair tips—some stained with ink–and pointed wooden ends. These ends are meant to appear like the tips of brushes, mimicking the actual animal-hair tips that are out of sight.

While the different lengths of the tubes and the dense clustering results in what looks to the eye like a rather casual, un-predetermined pattern, the tubes are all actually quite carefully, almost mathematically placed. On the one hand this construct reminds us of reed mouth organs constructed of bamboo tubes of different lengths, instruments popular in China where they are called sheng and Korea where they are called saenghwang(fig.1). On the other hand, the clustered bamboo stalks appear to be reflecting their natural habitat where they are clumped together, sometimes so densely that the stalks seem inseparable.

Interestingly, a number of Korean brushpots are formed from multiple bamboo stalks linked together, including an 18th-century brush holder in a private Korean collection (fig. 2), providing a family for the seemingly eccentric vessel in the present exhibition. 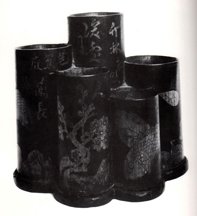