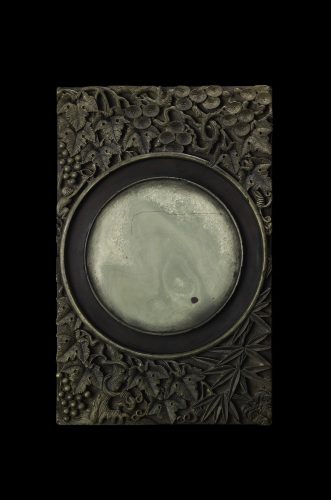 The Korean designer/artisan responsible for the decoration on the present inkstone stepped out of the traditional boundaries set by Chinese masters to whom his predecessors and contemporaries looked for inspiration, ideas, and technical knowhow. Here the standard “Three Friends of Winter,” the pine, plum, and bamboo that were firmly established in the arts of China, include a new friend, actually two. The fruiting grapevine has replaced the flowering plum, and a small monkey has scampered upon the scene. How does all of this affect the meaning of the “Three Friends of Winter” theme, a theme conveying attributes of fortitude, resilience, and perseverance? Greatly. The meaning of the original three-friend theme was tailor-made for the idealized scholar-gentleman, a theme emblematic of scholarly perseverance and integrity. The fruiting grapevine signified wishes for fertility and numerous progeny, indeed important in a Confucian society. Here, however, the emphasis and focus of the motif is shifted from the soul of the scholar to that of the society as a whole. Interestingly, the word for monkey in Korean is a homophone for emperor and thus the monkey was a symbol of authority and high governmental position. This is quite different from the Chinese who viewed the monkey as a creature cheerful, energetic, and clever and nothing more.

The dark grey stone with greenish tinge, a grinding surface in paler green with lighter swirls of green and one stone eye, allies the material well with the well-known Duan inkstones of Chinese manufacture. However, the present stands apart from Chinese inkstones in its relative massiveness, its stark, sharp geometric form and overall, deeply-cut sculptural décor in which no space around the grinding surface is left untouched. Further, in contrast to Chinese inkstones, which are invariable carefully finished, the Korean example here is left with rough sides and base, an unfinished look in the eyes of the Chinese but to the Koreans, perfectly acceptable, perfectly perfect.

Related examples, all datable to the Joseon dynasty in the 18th century, include an inkstone with monkey-and-grape design published by Kwon To-hong in Pyoru, “Inkstones,” Seoul, 1989, no. 1; a second in Robert Moes, Auspicious Spirits: Korean Folk Paintings and Related Objects, Washington D.C., 1983, no. 80, p 156; and a third with “Diamond Mountain” design also published by Moes as no. 81, p 157.