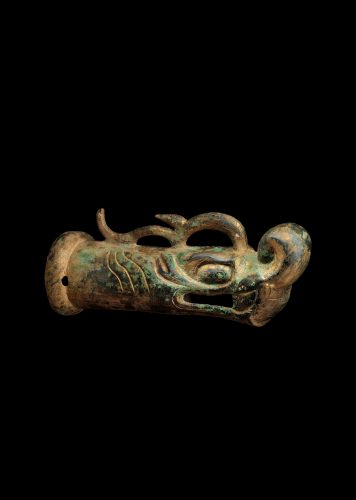 The finial is a hollow tube cast with the image of a dragon head, its snout curled back in a ball and with an openwork slot behind the mouth. The eyes are surrounded by deep furrows and folds that extend backward like heavy frames. On top of the dragon’s head is a spiked mane streaming back and scrolling up just in front of the rounded socket rim pierced with a small aperture on one side. Some of the details are rudimentarily incised such as the triple folds of the skin on the neck, the one tooth below the snout and the pupils of the eyes. The gilding exhibits some light green patches.

Based on a comparison with a number of related gilt-bronze dragon-head finials, such as the four examples from collections in Korea illustrated here (figs. 1-4), the present can be attributed to the late Unified Silla period (A.D. 668-935) during the 10th century and possibly earlier. These finials are invariably cast with strong features and detailed with shallow incising or engraving, the dragon heads often with open mouths revealing jagged teeth which sometimes hold an orb (a magical jewel or the pearl of Chinese dragon lore), others with jaws clenched tightly together, some with elongated snouts and others, such as the present, with snouts dramatically curled back, all with single horns, branching as they sweep back over their heads, and with large bulging eyes and furled brows contributing to their fearsome expressions.

A number of dragon finials with long, hollow, vertical necks are known to have functioned as finials for banner or f lag poles. The finial in the Kyongsang National Museum, cast with an impressive crest or comb and dorsal fins, grasps an orb, which is described as concealing a still functioning pulley (fig. 2). The dragon heads with closed mouths such as those in figures 3 and 4 and a similar one in the Metropolitan Museum of Art in New York, were cast with loops below the chins for suspending bells, and others are believed to have been architectural embellishments, used as acroteria on the exteriors of buildings or capping beams on the interiors. Images of such atropaic powers as the Korean dragon possessed would have made them welcome in almost any context and those of especially strong modelling, bold presence, and emblazoned with a heavenly golden color, would have made them most appropriate for Buddhist temples, royal residences, and public or official buildings.

The later 7th century in Korea ushered in what is lauded as a golden age, after one of three warring states, Silla, with Chinese support, was able to unify the country, the subsequent two and a half centuries known as Unified Silla. Yet, already existing between Korea and China, despite that support, was a long-lived love-hate relationship, one that persisted through Unified Silla. Although assisting Silla at the outset, the push of China’s military into the peninsula pushed the people of Korea away. At the same time the pull of China’s cultural richness pulled the people of Korea towards her. Unified Silla existed side by side with a China flourishing under the great Tang dynasty (A.D. 618-906) and was deeply influenced by this giant neighbor in all areas—philosophy, education, government, city planning, religion, and the arts. However during the course of this period of absorption, Silla was able to develop “a truly Koreanized art encompassing all the Korean qualities and spirit.”1

These gilt bronze finials might be something of an exception to the rule. Pre-Tang dragons, such as those illustrated here in figures 5 and 6 from the Six Dynasties period (A.D. 222-589), provide such close counterparts in form and spirit that the Silla dragon in figure 1 here was misidentified in very recent times as Chinese. However, by and large there is a tougher, bolder tactile quality in the Korean works. This, however, does not obtain overall to Korean arts of the late Silla and early Goryeo period when elegance and subtlety were becoming hallmarks.

While one would think the dragon was adopted from China, the Koreans claim their own dragons, with their own origins, habits, and mythology. Interestingly, the first ruler of Unified Silla made a death-bed promise to his son and heir that if cremated and his ashes spread on the sea, he would return as a dragon to protect the nation against invasion.2 It is perhaps his spirit manifested in these bronze dragon heads, appearing in the twilight years of the kingdom he established. 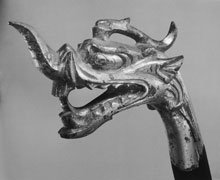 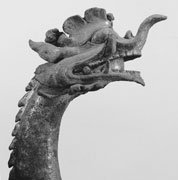 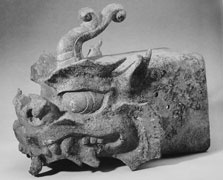 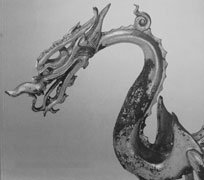 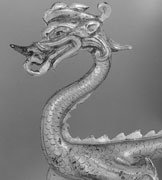