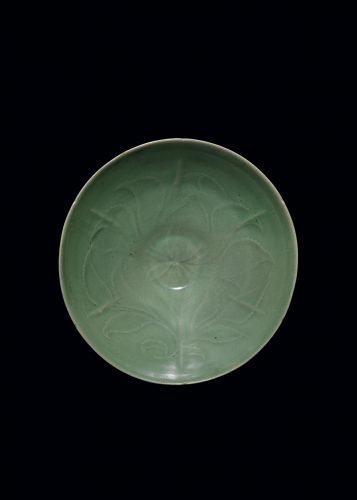 The deep bowl is thinly potted, light in weight and of faint hexafoil form, the rim notched at six points, the lobes barely visible on the exterior, and the corresponding ribs on the interior ascending from imperceptible points low on the cavetto, each to a notch on the rim. The ribs subtly divide the interior into six segments, with the impressed floral decor, enhanced with incised outlines and combing, further obscuring the indistinct dividing lines as it sweeps over the surface to form a unified uninterrupted design, even skimming over the small circular well at the bottom of the bowl. A large peony blossom with its undulating petals slightly detached issues from a single stem that also sends leaves branching out to left and right. The blossom is roughly centered above the well, two of its minor petals curling into the well. The leaves and petals are similarly formed with slightly raised serrated edges and finely combed veins, with outlines of leaves, petals and stems enhanced with slight pencil-thin incising. The decoration seems to float beneath the sea-foam, slightly bluish celadon green glaze, which is characterized by a milky depth and soft sheen, and also exhibits specks of black. The outer walls are undecorated, providing a field of glaze that continues over the short foot onto the base where three round spur marks are visible.

At the heart of early, classic Goryeo celadon creation is understatement, as expressed in this and related bowls with almost identical designs, for example, one in the National Museum of Korea in Seoul (fig. 1), another in the Metropolitan Museum of Art in New York City (fig. 2), and a third in the Freer/Sackler Gallery in Washington D.C. (fig. 3). These lobed bowls come into being almost as suggestions. Slight nips of the rim, corresponding faint depressions around the exterior, and this whisper of a shape is produced. The impressed floral design is subtle enough to require close perusal to appreciate its complexity and deftness of execution. The ceramic moulds that were used to produce such decor when the sufficiently wet unfired clay bowls were pressed over them, were created in such a manner that the design appears almost as if layers were superimposed on one another to produce the final image, much like a digital image can be produced today.

Technology, inspiration for shapes and decorative designs, and perhaps even artisans were the imports from China that gave the production of celadon in Korea its start. The present bowl, while occupying an aesthetic realm at some remove from Chinese celadons, at the same time demonstrates at this stage a respect for control and even a desire to achieve a kind of perfection that we associate with Chinese high quality ceramic production. It was the remove, however, and the sweet subtlety of the Korean wares that appear to have enchanted the Chinese when Korean wares entered China during the Northern Song period. Some of us believe that the impact on Song ceramic history was thereafter momentous, but that is a subject for later consideration.

Back on Korean soil, even at the stage of celadon production when the potters were most under the spell of the Chinese, not only did the “spirit” of the Korean potters shine through but the methods for achieving a given effect were their own, for example the serrated petals and leaves that add a mild eccentricity to the design, as well as the use of finely incised outlines that serve as an enhancement to the mold impression. By the later 12th century a more relaxed air had come well into play, a more casual attitude in regard to execution, but not at the expense of artistic expression. Innovative methods of decor, such as inlaid slip designs on celadon wares, allowed for a line of development separate from the Chinese and the confidence to explore new realms entirely their own.

The subtlety and serenity on the one hand and the relaxed, “natural” aura of these wares on the other, very much appealed to the Japanese who remained until recent times, when Western scholars began to focus on Korea, the primary advocates of these Korean wares, and the source for the present bowl. 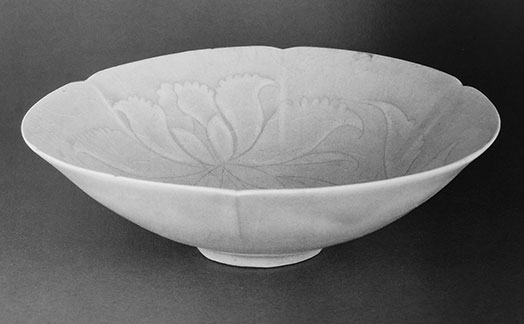 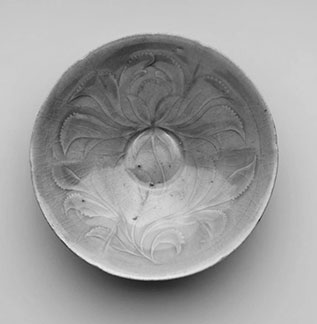 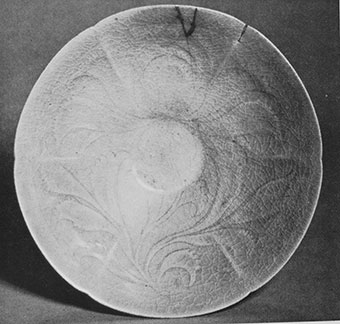