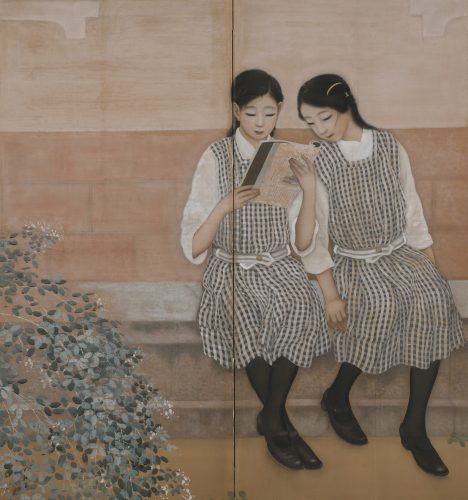 Two girls, one leaning toward the other, sit reading on a stone bench protruding from a wall; the flowering bush in the foreground suggests that they are in an enclosed garden. They are dressed in identical fashion, save for the hair comb in the coiffeur of one. These uniforms indicate that they are students at a girls’ school, an indication of high economic status since only girls from wealthy families could attend in those days.

The seriousness of their expressions, and the intentness with which they are reading, suggests that they are reading something of great interest and import. The title of the magazine can be read as Shojo no tomodachi, “Girls’ Friends,” and the portion they are reading identified as the “Letters” section, indicating that then as now students were more interested in the activities of their peers than in purely academic subjects.

The artist, Kontani Koshun (1890-1945), was born in Kanazawa in Ishikawa prefecture. Initially studying with the local artist Takamura Yuyo, Koshun then travelled to Kyoto to study with Yamamoto Shunkyo (1871-1933), an important figure in Kyoto art circles and one of the founders of the modern Kyoto school. Koshun’s paintings were accepted for exhibition in the Bunten (Mombusho Bijutsu Tenrankai, sponsored by the Minister of Education) exhibitions in 1915, 1918, and 1926. Around 1921 he returned to Kanazawa, and in 1939 was named head of the Hokuriku Fine Arts Association, becoming also well-known for his haiku poetry.

Koshun became known for his paintings of beautiful ladies, and the present screen exemplifies the great attraction of his approach. The girls are very well painted, with every detail given considerable attention and executed with excellent technique, including hints of Western-style shading. Most compelling, however, is the psychological understanding and evocation of the subjects themselves, the young girls seeking knowledge and sophistication by consideration of the activities of their peers.